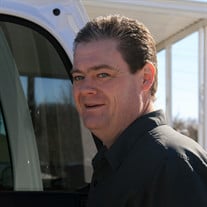 Kurt Andrew Steck, also known as Rock, passed away suddenly on the morning of May 18, 2015 at Kaiser Permanente Medical Center in Sacramento, California. Kurt was born on February 24, 1970, in Somers Point, New Jersey to Paul V. Steck, Jr, and Iris Nadiene Steck. He grew up in a big family, being the 9th child out of 10. He played football and wrestling at Wasatch High School in Heber City, and soon earned the nickname of Rock. He graduated in the Class of 1988. On August 30, 1998, he married Dawnyel Daley. They soon added to their family and had a son, Paul, and a year later, a daughter, Katie. They were happy, but on August 27, 2008, he lost his wife and was left to raise his children alone. It was so hard for him, but his children kept him going. He found happiness again when he met Kathy Gisler and was so excited for everyone he knew to meet her and love her as much as he did. Kurt had a quick wit, and a catchy laugh, that would always draw people to him. He always had a smile on his face and a joke or two to share. His most favorite thing was being with his family. He loved them all with his whole heart. And then some. He was a fiercely loyal friend, and had a hard time when others weren't the same. He had such a wonderful, generous heart and tried to help everyone. Even people he didn't know. He would have given the shirt off his back to anyone if it would help. Kurt was always ready to have a good time with a philosophy of "the more the merrier". He made finding and getting into trouble fun. Kurt loved to play music, cards, games and was great just hanging out and talking. He always loved going to concerts and continued that tradition with his kids. He was adamant that the family stay connected and insisted on being the first friend of any family member who joined Facebook. He will be greatly missed by everyone who knew him. Kurt is preceded in death by his parents, Paul and Iris Steck, his brother, Bryan Steck, and his wife, Dawnyel Steck. He is survived by his children, Paul Gordon Steck and Katie Iris Steck, his siblings, Paul V. Steck III, Debbie Stoehr (Leo), James Steck (Kim), Bruce Steck, Vincent Steck (Julie), Kimberly Davidson (Wes), John Steck (Alma), Thor Steck (Jacie), and his new love, Kathy as well as many nieces and nephews. A visitation will be held on Friday, May 22, 2015, 1:00 pm at Probst Family Funeral Home, 79 East Main Street, Midway, Utah. A graveside service at Heber City Cemetery will be help at 2:30 pm. Interment will follow. There will also be a luncheon provided at the church across the street afterwards. We invite you to join us.

The family of Kurt Andrew Steck created this Life Tributes page to make it easy to share your memories.

Send flowers to the Steck family.