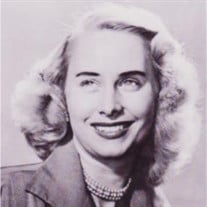 Our dear, precious mother, and grandmother, Kathryn Louise Hutcheson passed away peacefully on April 3, 2018 and returned to the waiting arms of her dear husband Ralph E. Hall, her parents, and ancestors. Kay (as she was called) was married to Ralph Hall for 68 years. They enjoyed their lives immensely for the last 30 years in Midway, Utah, where they lived out their dreams to live in a beautiful home in a high mountain valley. Kay is survived by her six children, Greg Hall, Randy Hall Christina Berg, Julie Fields, Theresa Jayne, and Vita Hall. She is also survived by 16 grandchildren and 18 great grandchildren, all of whom loved her dearly and will sorely miss Grandma Kay. She was born in Dennison, Iowa and grew up in this small mid-western town where she loved to swim in the local pool and lakes nearby. She loved to play tennis and basketball, and to ice skate and sleigh ride. As far as we know she never lost a swimming race. She later became a life guard and swimming instructor at the old Deseret Gym. She taught all the kids in the neighborhood to swim. It must be said that Kay Hall is a remarkable women and led an extraordinary life. Anyone who met Kay would invariably say, “Kay is not only charming, smart, friendly and kind, but she is also one of the most loving people I have ever met.” A significant event occurred in Kay’s life when in 1943 during WWII she and her best girlfriend Bonnie decided to go to California to work in an aircraft factory. They jumped on the train to California, but when the train stopped in SLC and they looked around at the beautiful mountains and valley, (She had never seen mountains) they felt inspired to stay. A week later, Kay and Bonnie working as an A&W Rootbeer carhop, Ralph Hall drove up with his best friend Scott. A few weeks later all four eloped to Idaho and had a double wedding. Shortly thereafter Ralph and Scott were shipped off to war and would not return for two years. Kay lived with Ralph’s parents and worked as a secretary at Fort Douglas while Ralph was serving his country. She loved to tell the story of getting off the train to meet her one and only true love, and then she would add that the other purpose was to find the Gospel of Jesus Christ in the LDS Church to which she remained extremely faithful her entire life. She served in numerous callings in Mutual, Primary, and Relief Society. Ralph and Kay were sealed in the Los Angeles Temple. Ralph worked diligently with his Father and Brother, Ike in Hall’s Candy Company in SLC from 1945 to 1960. And then he and Kay and their five children (one more would be added) moved to Manhattan Beach, California in 1960. He started a new candy company with Kay by his side—and in fact named it, Kay’s Candy Company. For years Kay did the accounting for the company while raising six children. She worked in the candy factory wrapping large suckers and candy canes, but always found time to take her kids to the beach, to their sporting and dance events, and served faithfully in her church callings. She taught her young children to swim at a very early age, to shoot guns, hike, fish, play tennis, ice skate, ski, and taught them hard work and many other valuable skills. The girls became champion swimmers and runners. The two boys were on the BYU track and ski teams. Later in life one would rarely see Kay without a book in hand. She was a prolific reader and loved to study American history. She was an authority on the Revolutionary War and spoke at DAR (Daughters of the American Revolution) meetings. She wrote and published a beautiful family history book. Kay continued throughout her life to do extensive genealogy work. She loved her life and friends in Midway as she continued to serve in the church and in the community. Funeral services will be held Tuesday, April 10, in Midway, Utah at the River Road Chapel, at 165 N. Center Street, Midway, with a viewing at 12:30 pm in the Relief Society Room just prior to funeral services in the Chapel at 2:00 pm.

Our dear, precious mother, and grandmother, Kathryn Louise Hutcheson passed away peacefully on April 3, 2018 and returned to the waiting arms of her dear husband Ralph E. Hall, her parents, and ancestors. Kay (as she was called) was married... View Obituary & Service Information

The family of Kathryn Louise Hutcheson Hall created this Life Tributes page to make it easy to share your memories.

Send flowers to the Hall family.