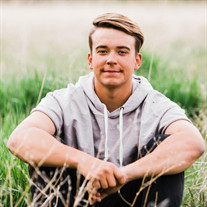 “The ones that love us never really leave us; you can always find them….” Sirius Black Kaden Jacob Baxter, beloved son, brother and friend, was taken from this world far too soon, in a tragic car accident on September 24th, at the age of 20. Born on December 22, 1999 in American Fork, Utah to Jared Baxter and Donielle Baxter, Kaden was the second of four brothers. Sharing a love of sports, dogs, movies, and the outdoors, Kade and his brothers had a special bond. He loved his family fierce; they were his tribe. Growing up in Heber City, Utah, Kade graduated from Wasatch High School. He excelled in both academics and athletics. “Big Bax” spent his high school days on the baseball diamond and the football field. Captain of both teams, he was a tough competitor, receiving many accolades. Kade was larger than life. His passion for everything allowed him to truly live his life to the fullest. He could always be found in a crowd, where his contagious laugh had the ability to lighten up the seriousness of this world. Kade had the biggest heart, wearing his emotions on his sleeve. He accepted everyone, and all were drawn to him and his zest for life. His endearing smile will never be forgotten. His laughter will continue to echo throughout this life until we are together again. Kaden is survived by his parents, his brothers Tag (Emma), Garrett and Crew; his grandparents, Donna (Richard) Axmann, John and Dixie Baxter; preceded in death by his grandfather Donald Marten, cousin Chase Marten, and childhood dog Harley. He also left behind many aunts, uncles, cousins, and his dog Finn. “The flame that burns twice as bright, burns half as long.” Lao Tzu *Viewing will be held Monday, September 28th Cobblestone Ward Building 1661 E. 980 S. Heber 5-6 pm for those who are high risk for COVID19 6-8 pm for all *Funeral Service Heber City Cemetery-Tuesday, September 29th at 11 am *Funeral also broadcast virtually via Zoom. 1.Login into Zoom 2.Click on "Join a Meeting" 3.Join the meeting id- 4356545458. 4.Click "Join" *Please be sure to mute your devise so the sound around you isn’t broadcast to everyone else. Friends and family may visit the online guestbook and share a memory of Kaden at www.probstfamilyfunerals.com.

&#8220;The ones that love us never really leave us; you can always find them&#8230;.&#8221; Sirius Black Kaden Jacob Baxter, beloved son, brother and friend, was taken from this world far too soon, in a tragic car accident on September 24th,... View Obituary & Service Information

The family of Kaden Jacob Baxter created this Life Tributes page to make it easy to share your memories.

“The ones that love us never really leave us; you can always...

Send flowers to the Baxter family.