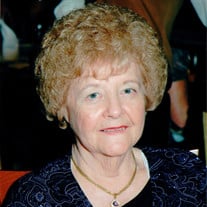 Joyce Christiansen Parris passed from this mortal world on September 9, 2015 to unite with her family members waiting for her to join them in a reunion in heaven. Her sweet Ricky’s loving arms were waiting to greet and to embrace her there. Mom was delivered into this world by a midwife on February 7, 1929 in Moreland, Idaho to Vernal Parley Christiansen and Violet Ella Grimmett Christiansen the second oldest of six children. She grew up on a farm and worked hard alongside her parents and siblings. Mom was an active child and enjoyed school and being with friends. She also had a sense of humor and was known to be quite a prankster at times. As a mother, her children became the recipient of these pranks especially during a holiday. After high school Mom moved to Pocatello to live in the YWCA and work the candy counter at Woolworths in downtown Pocatello. She met Don Rex Parris from Virginia Idaho and they were married in Pocatello on May 29, 1948. Soon after this union children began to join the family and brought much joy to the couple. First, Don Rex Jr., then Sherry Mae, Marsha Lynne, and Ricky Dee. Mom was involved with her children in their activites, in PTA, the scouting program for boys, and little league baseball. She also loved the Lord and taught her children good morals and values. She served as a Primary President and also in the Stake Primary. She and Dad were sealed in the Idaho Falls LDS Temple for time and all eternity. Mom also loved baseball; the Yankees, Mickey Mantle, and the Atlanta Braves. She was thrilled to death to be at an Atlanta Braves game one year when a fly ball came her way. She leaned over to catch the ball and found herself instead being caught by her favorite player Dale Murphy. She thought then that she had died and gone to heaven. Many childhood memories were made for us during yearly family vacations and on holidays. Mom made each holiday a special and magical event with Christmas being especially exciting. Dad and Mom purchased the Rex Parris Chevron Truck Stop and Fifth Avenue restaurant which became the first of many successful business years and ventures. Ricky’s life ended abruptly and unexpectedly on August 5, 1972 at the age of 15. This left a large emptiness in the family and a deep hole in Mom’s heart. Life changed after that loss and then again when Dad died in 1994. Mom was also preceded in death by grand daughters Harmony Bri Parris and Pam Egbert Parris Howard. Mom is survived by her children Don (Deanna) Parris, Sherry Jacobia, Marsha (Joe) Probst, a sister Elsie Ann Christiansen Stone McClellan, brother in laws Deryl G. Parris and Darrell E. Lewis, 14 grandchildren, 57 great grandchildren and one more on the way, neices, nephews, and cousins. A family prayer will be held in the Relief Society room of the LDS Highland 11th Ward building at 2000 S. Fairway Dr. in Pocatello on Saturday, September 12, 2015 at 2 p.m. with Bishop Steven Long. Funeral arrangements are under the direction of Clinton Probst of Probst Family Funerals, Midway, UT, grandson of Joyce. Burial will be in the Mountainview Cemetery in Pocatello that day next to her husband, son, and granddaughter Harmony. Our love goes with you Mom and Grandma! Your, Children.

Joyce Christiansen Parris passed from this mortal world on September 9, 2015 to unite with her family members waiting for her to join them in a reunion in heaven. Her sweet Ricky&#8217;s loving arms were waiting to greet and to embrace her there. Mom... View Obituary & Service Information

The family of Joyce Christiansen Parris created this Life Tributes page to make it easy to share your memories.

Joyce Christiansen Parris passed from this mortal world on September...

Send flowers to the Parris family.