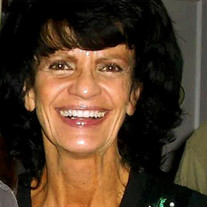 Joyce Edwards Harding Godfrey, 72, passed away on Tuesday, June 28, 2016 in the comfort of her home. She was married to Douglas Harding, later divorced. They had two sons together, Blaine Harding and Brent Harding. She was then married to Russell Godfrey, later divorced. Joyce was born in Heber, Utah on June 30, 1943 and was the daughter to Oliver and Faye Edwards. She attended Wasatch High School and was 1st attendant Rodeo Queen of Heber Valley. Joyce was employed at The Park Hotel/Trading Places International, and worked as a Front Desk Agent for 21 years. She was a member of the Church of Jesus Christ of Latter Day Saints. She enjoyed playing the piano in her church callings, decorating her home for every holiday, attending birthday parties, spending time with her dear grandchildren, and collecting Elvis Presley memorabilia. She will be remembered for her outgoing and bubbly personality. Joyce was a friend to anyone she came in contact with, and will forever be known as our sparkly purple grandma. She is survived by her sister Wanda Wright, her son Blaine Harding (Lou) and son Brent Harding. Her grandchildren, Tyler Harding, Chad Harding, Megan Harding Roberts (Sean), and Adam Harding, and former daughter in laws Patricia Thaxton and Linda Harding. She was predeceased by her father Oliver, mother Faye, and former husband Russell. The funeral service will be held at 11am on Thursday, July 7th at the Heber 4th Ward LDS Chapel (715 East 600 South, Heber, Utah). A viewing will be held on Wednesday, July 6th from 6pm-8pm and again on the day of the service from 9:30am-10:30am both at the church. Interment will be in the Charleston cemetery. Memorial donations and flowers may be made to the Harding family, and delivered to the LDS church at 715 east 600 south Heber, Utah.

Joyce Edwards Harding Godfrey, 72, passed away on Tuesday, June 28, 2016 in the comfort of her home. She was married to Douglas Harding, later divorced. They had two sons together, Blaine Harding and Brent Harding. She was then married to Russell... View Obituary & Service Information

The family of Joyce Edwards Godfrey created this Life Tributes page to make it easy to share your memories.

Send flowers to the Godfrey family.