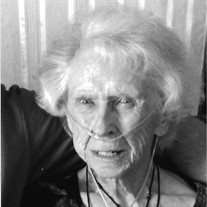 Josie Todd Hicken, 99, beloved mother, grandmother, great-grandmother, aunt, and friend, passed away Monday morning, November 30, 2015, in Heber City, Utah. She was born on February 27, 1916, in Heber City to David Alexander and Josie Moulton Todd. Josie grew up in Heber and graduated from Wasatch High School. She married Grant Murdock Hicken in Evanston, Wyoming, later solemnized in the Provo LDS Temple. Josie played the cornet in the high school marching band and traveled to California with the band to perform. During her twenties she became a very good secretary and worked in Heber, Salt Lake, and San Francisco until after World War II. After her children were grown, she went back to work as a Teacher's Aide in elementary and high school. Then she started working as a secretary again for three consecutive superintendents of the Wasatch School District until she retired. Josie was an active member of The Church of Jesus Christ of Latter Day Saints and held many callings throughout the years. Her favorite calling was Dance Director when she was young and taught the young men and women dances to perform at the Gold & Green Ball. She had a firm testimony of the Gospel which she bore in word and example. She was also a member of the Daughters of the Utah Pioneers, the Shakespearean Book Club, and various bridge clubs. She was a great reader and always had a book she was reading. Josie was a kind, gracious, and loving person and will be missed by all who knew her. Josie's family meant everything to her. She was always expressing her love to all of them and it was always reciprocated. She is survived by her children: Sharon (Dale) Wright, Marie Lupo, and Todd Hicken (Sandy), 7 grandchildren: David (Leigh Anne) Wright, Scott (Emily) Wright, Marianne (Richard) Channel, Amy Wright, Eric Wright, Alexander Hicken, and Cassie Hicken, and 11 great-grandchildren and many nieces and nephews, all of whom she loved dearly. She was preceded in death by her husband, Grant Murdock Hicken, her parents, and her brothers, Dean, Roy, Blaine, and Ray Todd. The family would like to express their sincere thanks to the staff at Sante' Assisted Living staff and Applegate Hospice nurses and staff for their hours of service, care, and concern the past few months. Funeral services will be held Saturday, December 5, at 2:00 p.m. at the Heber Cobblestone Ward LDS Chapel, 1661 East 980 South, Heber City, with a viewing prior to the service from 12:30 – 1:30 p.m. Interment to follow at Heber City Cemetery. Condolences maybe shared online at www.probstfamilyfunerals.com

The family of Josie Todd Hicken created this Life Tributes page to make it easy to share your memories.

Send flowers to the Hicken family.