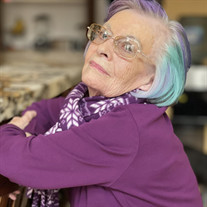 Josephine Irene Theresa Vamis (Josie) was born on January 11, 1936 and passed away peacefully in her sleep on August 16, 2021. Josie was born in Richmond, England and lived in the UK until 1955 when she moved to America to marry Andrew Vamis in Cleveland Ohio. Their serendipitous meeting occurred during the coronation of Queen Elizabeth II and was among their favorite stories. Josie and Andrew were married until his death. Josie leaves behind her daughter, Joy DelGiudice married to Tony DelGiudice, and her son Andrew (Andy) R. Vamis and his wife Kelly Vamis. Josie has 4 grandsons: Neno DelGiudice (36), Jon DelGiudice (31), Nicholas Vamis (20) and Lukas Vamis (16). Josie was proud of her four grandsons and they were truly the joy of her life. Josie has six living siblings: Christina Andrews, Austin Bray, Godfrey Bray, Elaine Mackover, Keith Feldman and Sally Russell. Simone Nichol preceded Josie in death. She lived a long and very interesting life that included traveling the world and a fair bit of adventure. In addition to England and America she spent several years living in Germany and Italy. She shot the Colorado rapids, went to the Galápagos Islands and walked on the Inka Trail among some of those adventures. Josie and Andrew eventually settled in the East Bay and Josie subsequently moved to Berkeley in 1986 after Andrew passed. In 2014 Josie moved from Berkeley to Park City, Utah, to live with her daughter and family. Josie was the embodiment of an “English Rose,” and while she left England at the tender age of nineteen to create a life in America with Andrew, she made it a priority to never lose her English accent. Josie loved sharing the stories of her travels, as well as writing poetry. Josie and Andrew loved ballroom dancing, and together they taught on a professional level. Their goal was to dance in every capital in the world, which they nearly accomplished before his untimely death. Josie had a love of Classic Hollywood films, and collected movie star pictures since she was a teenager in England. Collecting was one of her favorite hobbies and her collections included: spoons, thimbles, little boxes, eggcups, handkerchiefs, and doilies. Upon moving to Park City she adopted her daughter’s little dog, Bear, who she deemed her “fuzzy heart.” Bear was her devoted companion who spent all hours in her company, and was found loyally beside her after she crossed from this life. We love and miss you Mom. To view the services live, please visit https://my.gather.app/remember/josephine-vamis.

Josephine Irene Theresa Vamis (Josie) was born on January 11, 1936 and passed away peacefully in her sleep on August 16, 2021. Josie was born in Richmond, England and lived in the UK until 1955 when she moved to America to marry Andrew Vamis... View Obituary & Service Information

The family of Josephine Irene Vamis created this Life Tributes page to make it easy to share your memories.

Send flowers to the Vamis family.