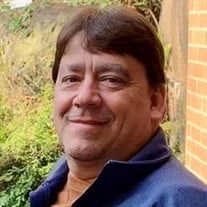 We are deeply saddened to announce the passing of Joseph Russell Wynn, 56, of Heber City, UT. Joe was born on October 5, 1965, to Russell Wynn and Karla Wynn in Blackfoot, ID. He achieved the rank of Eagle Scout and graduated from American Falls High School in American Falls, Idaho in 1983. Joe attended college at Utah State University, where he graduated with a double major in Pre-Law and Business Administration in 1987. Early in his college years, Joe served as a Senate Intern in Washington D.C., for then Idaho Senator, James A. McClure. While at Utah State, Joe was active in the Sigma Nu Fraternity and served as Chairman of the Robins Awards his senior year. In the fall of 1985, Joe met the love of his life, Laurie Buys. They shared many fun adventures while at Utah State. Following graduation, Joe and Laurie were married November 5, 1987, and moved to American Falls where Joe lived up to his Idaho roots and helped manage the Wynn family potato farm (much to Laurie’s surprise, as she thought she was marrying a soon-to-be law student). In 1997, Joe and Laurie decided “to Hell with potatoes” and they moved to Laurie’s hometown of Heber City, Utah to help run the Buys’ family business - a weekly newspaper and printing operation - The Wasatch Wave, Summit County News and Wave Printing. Joe and Laurie then bought the Wave Publishing Company from Laurie’s parents and entered into a partnership with her sister and brother-in-law - Paul and Kari McFee. In addition to running the business office for Wave Publishing, Joe worked in the dairy department at Lee’s Marketplace - which he enjoyed immensely. In his “spare” time, Joe could be found reffing, marking soccer fields, or otherwise enjoying “the beautiful game” up and down the state. In October, 1990, Joe and Laurie were blessed with the first of two daughters, Erin Jo, who was then joined by a little sister, Ryann McCall in June of 1995. Joe was an amazing dad and beamed with pride when he talked about their accomplishments and what they were doing in their busy lives. He coached both girls in soccer when they were younger and in typical “dad-man” fashion always reminded them to check the oil, registration, tail lights, etc. on their cars, when they were older. Joe’s “Love Language” was gift-giving and was always giving family and friends funny t-shirts and thoughtful little gifts. He leaves a massive hole in our lives and we will miss him more than words can say. Joe was a man of few words, but once you got him talking he was known for his quick wit and overwhelming kindness. His mother loves to reminisce about Joe as a child reading the encyclopedia - for fun. Trust us…he is the one you would want on your Trivial Pursuit team. Joe is survived by: his wife, Laurie, his daughters Erin (Jeff), Salt Lake City, and Ryann, Seattle, Washington; his parents Russ Wynn and Karla Wynn, Pocatello, Idaho; siblings Jeff (Deb), American Falls, Idaho; and Andrea (Dave) Burchard, Alpine, Wyoming; and his extended family, his fraternity brothers, and an abundance of wonderful friends. In lieu of flowers, the family requests donations be made to Utah Youth Soccer (https://www.utahyouthsoccer.net/donate) or Paws for Life Utah (https://pflu.org/donations/). A Graveside Service will be held on Wednesday, January 26, 2021 at the Heber City Cemetery, 680 N 550 E, Heber City, UT 84032. A Celebration of Life will be planned later in the year.

We are deeply saddened to announce the passing of Joseph Russell Wynn, 56, of Heber City, UT. Joe was born on October 5, 1965, to Russell Wynn and Karla Wynn in Blackfoot, ID. He achieved the rank of Eagle Scout and graduated from American Falls... View Obituary & Service Information

The family of Joseph Russell Wynn created this Life Tributes page to make it easy to share your memories.

We are deeply saddened to announce the passing of Joseph Russell...

Send flowers to the Wynn family.