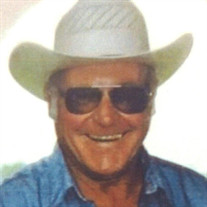 Joseph Eugene Giles Was born August 15, 1934 he passed away October 15, 2020 in Orem Utah from very unexpected complications from an infection. Joe was a legacy in our community, a very large man with a very soft heart. Joe graduated for Wasatch High School in 1952. He went on to work at for Great Oaks Timber located in Hailstone, Utah (now under water at the Jordanelle reservoir). He followed in his father's footsteps to serve out Country and he joined the National Guard, where he served on active duty stateside. When he returned home, he married Peggy S Gale August 31, 1955. They have been married for 65 years, through the thick and thin. Joe was Highway Patrolman for 25 years, serving faithfully until he retired. He covered many miles throughout the whole County often taking kids home, or giving them a warning, "I don’t want to see you for the rest of the night” After that he went to work for the State Park Service as a Ranger and he spent a lot of time on the boat they called “Smokey II” He went to work for the Wasatch County School District driving a School Bus and was loved by so many of the kids as well as his co-workers. All the time he was working the full-time jobs he was running the family farm raising alfalfa to feed their beef cattle which was a family tradition. Working from sun up until sundown is the way farmers and ranchers are pre-programed to work as he was taught from a very young age. He always had enough hay to keep the livestock fed through the winter. Joe is survived by his wife Peggy Giles, Bert and Steve (Joan) brothers. Monta Giles (daughter in law), Grand children, Josh (Lorna) Chad Briggs (Ryan) Colby (Brandy) CaHugh (Mel) Brady, Demps, Justin Lee (Hannah) Giles. Great Grandchildren Makayla, Shelby, Tycoda, Trennon; Haikyn; Corbin Pace, Trason, Jase And also loved by Alexis, Ellie Ana and Marcus, along with many Aunts, Uncles and cousins. Preceded in death by Parents, George & Roberta, sister Fran, Sister in Law Donna, sons Randall Hugh, and Joe Errol. Daughters Debra Joe, Jolynn and Baby Boy Giles. Joe set a great example for his family to follow in his footsteps. There will be a family and friends viewing Thurs. Oct. 22, 2020 from 9:30 –10:30 AM at the Probst Family Funeral Home in Midway. A grave side service will follow at the Midway Cemetery at 11:00 AM.

Joseph Eugene Giles Was born August 15, 1934 he passed away October 15, 2020 in Orem Utah from very unexpected complications from an infection. Joe was a legacy in our community, a very large man with a very soft heart. Joe graduated for... View Obituary & Service Information

The family of Joseph Eugene Giles created this Life Tributes page to make it easy to share your memories.

Send flowers to the Giles family.