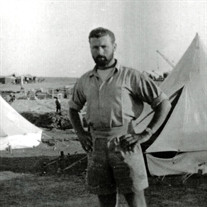 Joseph Anderson, our favorite Scotsman, was brilliant, witty, and adventurous. He passed away on February 13, 2022 in Heber City, Utah at the age of 94. He is survived by his three children, Valfrid Anderson of West Hollywood, CA, Stuart Anderson of Denver, CO, and Shelley Jo Cole of Heber City, UT, 8 grandchildren, and 5 great-grandchildren. He was preceded in death by his wife of 59 years, Sandra Engstrom Anderson. Joe was a renowned engineer who directed the world’s largest civil engineering projects. He lived all over the world seeking engineering solutions to world issues from Scotland, Malaysia, Singapore, Turkey, Canada, Saudi Arabia, England, and his beloved United States. Joe was a people person who prioritized making connections with others and enjoyed deciphering surnames and ancestry. Even 20 years ago, as he was being wheeled into the O.R. for open heart surgery he was chatting about the doctor’s surname. He was born in Glasgow, Scotland in 1927 to Mary Eaglesham and Thomas Anderson. As a child he was evacuated during World War II and was sent to the small fishing village of Rockcliffe with his mother and siblings while his father worked on the war effort in Glasgow. The reality of the war was felt. Everyday, he had to carry his lunch in a gasmask to school, but Rockcliffe was still full of adventure for young Joe. Like the time he and his friends built a secret hideout in the hills which the townspeople found and mistakenly thought belonged to a spy. While there, Joe made friends with an old sea captain named “Cap’n Bie”. He helped Cap’n Bie with chores and walked him over the dark hills by candlelight every Friday night so that Cap’n Bie could drink Ale at the local pub while Joe drank a lemonade outside. Joe’s adventures became so loved by his children and grandchildren that Sandra published the stories in a book called Rockcliffe. Joe graduated in civil engineering at the University of Strathclyde in Glasgow and was conscripted into the British Royal Corps of Engineers in 1947. He was sent to Malaysia where he built roads, camps and field hospitals and was made an acting captain. After his service in the military, Joe worked in England and Scotland and would travel recreationally across Europe by road-bike and motorcycle. In the mid-1950’s he worked on a hydroelectric project in Turkey on the Anatolian Plateau where he met his future wife, Sandra, whose father was his boss. Joe immigrated to the United States in 1957 on the Queen Mary. He bought a Lincoln convertible with cash and drove it cross-country to work as an engineer constructing the Glen Canyon Dam across the Colorado River. Every weekend Joe would cross a 640 foot high foot bridge over the canyon to get to his car and drive to Salt Lake City where his fiance Sandra lived. They were married on December 28, 1958 in Baguio City, Philippines, where Sandra’s parents were then living. In the 1970’s Joe was in charge of construction of two of the world's largest hydroelectric projects, Churchill Falls and James Bay, that together continue to supply renewable electricity for 11.8 million homes. Both projects involved extreme temperatures, large work forces, and remote access over enormous areas. Equipment and supplies were often flown in on ice runways with air fleets that rivaled many countries. In 1977, Joe became Senior Vice-President of Bechtel Inc. and took on the role of Program Manager of what the 1992 Guinness Book of World Records called “the largest construction project in history” - Jubail, an industrial city built from scratch in the Saudi Arabian desert. There were 52,000 workers representing 62 nationalities and Joe managed a budget that exceeded one billion a month for over a year. Jubail II is still moving forward; Joe was there when the giant metropolis was nothing but a desert and his family lived in a trailer next to camels. In 1988, Joe became the Deputy Managing Director of Eurotunnel, a 31-mile railway under the channel connecting England to France. It is still the longest underwater tunnel in the world. After retiring from Bechtel he formed his own company to pursue environmental projects and sustainability, concentrating on recovery and reuse of municipal waste streams. As a beloved father and grandfather, he was optimistic and always looked for the good. It seemed that he had unlimited tokens at the arcades, never-ending rounds of Shirley Temples, and he was always eager to engage in conversation or help with science or math homework. In later years, he was caregiver to Sandra who had Parkinson’s Disease for her last 12 years. Sandra was the love of his life and he took care of her to the very end with the utmost love and care. Tennis and golf continued to be his passion and he remained extremely sharp, still mastering conversations in science, world affairs, and history until the day he passed. Joe, a man in “The Arena”, lived an undaunted life. He taught us everything from how to be inquisitive to how to make orange marmalade toast. Joe had hoped to live to 99 like his coal miner grandfather, but Sandy wanted him home for Valentines so his call ended a little early. Joe’s absence is greatly felt and he will forever be in our hearts. ‘Stand Sure’ our angel ‘Dam builder’.

Joseph Anderson, our favorite Scotsman, was brilliant, witty, and adventurous. He passed away on February 13, 2022 in Heber City, Utah at the age of 94. He is survived by his three children, Valfrid Anderson of West Hollywood, CA, Stuart Anderson... View Obituary & Service Information

The family of Joseph Anderson created this Life Tributes page to make it easy to share your memories.

Send flowers to the Anderson family.