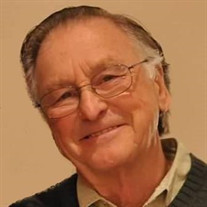 John Keith Thomas passed away peacefully in his beautiful Heber home on April 30, 2019. He was born December 24, 1928 in Pocatello, Idaho to Desmond Lyle Thomas and Margaret Lena Olsen. He married Pauline (Polly) Paul October 15, 1948 and they were later solemnized in the Salt Lake Temple. Together they raised four children, Gay Lynn, John, Larry and Scott. He was a man of service. He would do anything for his family to make sure their needs were taken care of. He attended college later in life helping with his career advancements. He would always put his wife first wanting her by his side with plenty of family time. He served his country honorably in the United States Army during the Korean War. He served his Lord faithfully with all his heart, accepting any call to serve in the Church. Those he associated with in callings and those who benefited from his acts of service had a great respect for him and his leadership talents. He served two missions with his eternal companion. They served in the Baton Rouge Louisiana mission office, enjoying their association with the great missionaries. They served a unique mission during the 2002 Winter Olympics in Midway. They were responsible to create a functioning Family History center which would be available to the visitors. Family History became a significant part of his life while at work at the Church Office Building or at home assisting anyone who asked for help or setting up Family History Centers. The living and dead have been blessed by his service. He loved the out of doors. His father-in-law taught him to fish, which he took a liking to. He would take his sons hunting with some of his good friends. A ski rack was always mounted on the roof of the car during the winter season. Snow skiing became a wonderful winter sport for the whole family. At the completion of building an inboard boat with his twin brother, hobbies and priorities changed. Water skiing trumped fishing and hunting and the boating legacy began. Jackson Lake, Flaming George, Lake Powell became the annual family trips. Many adventures during those boating trips are deeply engrained in the memories of children and grandchildren. His motto was, ‘a family who plays together, stays together’. He loved his Heber farm and small apple orchard, which kept the part time farmer busy. He enjoyed being in the farming community and being accepted by the neighbors. He had almost as much love for his tractors as he did for his wife. He has a great love for his 20 grandchildren and 27 great grandchildren and always enjoyed their visits. During special times of the year, all the grandchildren would pile into a trailer padded with blankets and enjoy a ride behind the tractor. The most relaxation he experienced would be to sit on the back patio listening to the water fall, hearing the birds in the trees, reading or listing to talk radio and sipping a diet coke. Sometimes this serenity would end as the Heber Creeper chugged by. Keith is survived by his loving wife of 70 years, Daughter Gay Lynn (Marvin) Osness, sons John (Mary) Thomas and Larry (Cindy) Thomas and brother Edward Thomas. He was preceded in death by his son Scott, grandson Paul, parents and two brothers. Funeral services will be held May 4th at 11:00 am at the Charleston Ward located at 3423 So 3500 W, Charleston. Friends may call between 9:30 and 10:30, prior to the services. Internment in the Salt Lake City Cemetery. The family wishes to extend a heartfelt thanks to the loving and caring IHC Hospice team. Lisa, his nurse, was attentive and helpful at any hour, an angel on earth. For complete obituary and condolences visit www.probstfamilyfunerals.com.

John Keith Thomas passed away peacefully in his beautiful Heber home on April 30, 2019. He was born December 24, 1928 in Pocatello, Idaho to Desmond Lyle Thomas and Margaret Lena Olsen. He married Pauline (Polly) Paul October 15, 1948 and they... View Obituary & Service Information

The family of John Keith Thomas created this Life Tributes page to make it easy to share your memories.

John Keith Thomas passed away peacefully in his beautiful Heber...