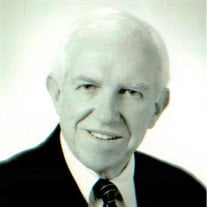 John K. Madsen Olsen peacefully passed away on January 23, 2015, at age 86, due to Interstitial Pneumitis. Born December 3, 1928, in Mt. Pleasant, Utah, to William C. and Pearle Madsen Olsen, the second of three children (sisters Billye Virginia – deceased, and Carlyle Morris). Educated in public schools, he was senior class president and active in sports at North Sanpete High School. He attended University of Utah, but following two and one half years in the French Mission for the LDS Church, and service in the US Air Force, he graduated from Brigham Young University in 1954 with a BA degree and from Stanford University Law School with a Juris Doctor degree in 1957. Married Susan Ellen Wyllie (1938-1992) on December 14, 1957 (later solemnized in the Salt Lake Temple). They had seven children: John Jr. (1958-1976); Erica (Mark) Clayton; Kirsta Olsen; William (Heidi) Olsen; Trevor (Pamela) Olsen; Katrina (Michael) Hall and Amanda (Greg) Adams, with 19 grandchildren and 5 great-grandchildren. John practiced law in San Francisco and Palo Alto for nearly 15 years and was a partner in the firm of Petty, Andrews, Olsen, Tufts, Jackson & Sander, from which he left in July, 1972, to serve as the first mission president of the Quebec Mission, later the Canada Montreal Mission from the date of world-wide name changes for the LDS Church. Upon release in 1975, he and his family moved to Provo where he opened his office as a sole practitioner of transactional law, and later in various office-sharing arrangements with other attorneys, specializing in real estate law. He was one of the organizers of and served several years as a director and secretary of Bonneville Bank in Provo. He was also active and involved in various real estate and business ventures and voluntarily served on the Provo City Planning Commission and later was Chairman of the Midway City Planning Commission, in addition to his practice. He retired at age 82. John was active in the LDS Church throughout his life and served as a counselor in two bishoprics, a bishop, a mission president, a stake high councilor, a high priest group leader, various missionary callings, and a faithful home teacher. He married Linda Mendenhall Campora on June 12, 1995, (solemnized in the Salt Lake Temple in 1996) and moved to Midway, Utah. They labored as Church Education System missionaries in the Washington D.C. North mission (2002-2004), and served together as ordinance workers in the Provo Temple for 13 years. John had an eye for beauty and loved his extensive art and antique collections. He also enjoyed classical music, symphonies, operas and plays. In earlier years he was skilled in photography, writing, and sang in various performing groups. He spoke excellent French, traveled to many countries throughout the world and was always up to date on current and political events. His family members and his Canadian missionaries were his greatest loves. He was a man of integrity, honesty and spiritual conviction. Funeral services will be held on Friday, January 30, at 11:00 a.m. in the LDS Midway Stake Center (165 N. Center St., Midway). Friends may visit the family at a viewing at the church from 9:00 – 10:45 a.m. on Friday or from 6:00 - 8:00 on Thursday evening. Burial will be in the East Lawn Memorial Hills Cemetery in Provo.

The family of John K Olsen created this Life Tributes page to make it easy to share your memories.

Send flowers to the Olsen family.