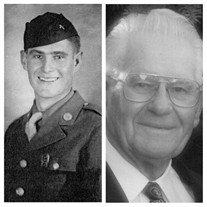 John Melvin Moulton graduated with honors from this phase of his eternal life on January 26, 2018 at the age of 96. He now rejoins his beloved wife, Barbara McDonald Moulton, who passed on May 6, 2017. We know she is overjoyed to be with her "handsome dude" again. He also rejoins his parents, Earnest Dewey and Blanch VanWagoner Moulton; his younger brother, Derial (Erma); sisters LaRay Miller (Emmett) and Margie Peterson (Pete); and his little granddaughter, Emily Ann Moulton. John Melvin was born April 2, 1921, in Heber City, Utah. He grew up in the home that his grandfather John Ephraim Moulton built, brick by brick, close to beloved cousins, aunts, and uncles. As the oldest son, he learned hard work on the family farm and ranch. This work ethic was something he carried with him throughout his entire life. Starting at an early age, he was always the consummate entrepreneur. In 1947 he started what came to be known as Moulton Machinery Company ‒ a business that operated for 54 years in Heber Valley. His service to country in the Army during World War II (1942 to 1945) was honorable and decorated. Years later he was thrilled to return to Europe and walk through the countries he had fought in, instead of having to "crawl over them." He was highly involved in community and civic affairs, never missing an opportunity to build Heber Valley into a better place. He joined his ancestors in making Heber Valley what it is today: a safe, beautiful place to live. John Melvin never shirked in helping to build the Lord's Kingdom. He always magnified his callings in the Church of Jesus Christ of Latter Day Saints, including a mission to Nauvoo and Carthage, Illinois, from 1993 to 1994. His testimony of the Savior was unflappable. He led his family into full acceptance of the Lord's plan of salvation and showed us how to have eternal happiness. He could repair almost anything and regularly did so for his family and friends. He certainly lived the old adage of "use it up, wear it out, make it do, or do without." Barbara and Melvin spent several happy winters in Washington, Utah, where he learned the art of lapidary. He became quite good at it and gave away everything he made. If you ever received a gift of John Melvin's work and attend his funeral, please wear it. He is survived by his younger sister, Colleen Frantz (Bud); son Michael "J" Moulton and his wife Ann; and his daughter Marilyn Hymas and her husband Richard. He was a wealthy man in posterity, with 12 grandchildren and 42 great grandchildren. They were the joy of his life. He and Barbara could never do enough for them. Their visits to him were worth more than money could buy. He freely expressed his love and gratitude for their kindness up until his dying breath. A viewing will be held Sunday, February 4, from 6 p.m. to 8 p.m. at the Heber 9th Ward chapel, 325 E 500 N in Heber City. Funeral services will be held the following morning, February 5, at 11 a.m. with a viewing from 9:30 to 10:30 a.m. in the same building. Interment will be at the Heber City Cemetery. Our family extends heartfelt thanks to the caregivers at Sante Assisted Living Center and Applegate Hospice care.

John Melvin Moulton graduated with honors from this phase of his eternal life on January 26, 2018 at the age of 96. He now rejoins his beloved wife, Barbara McDonald Moulton, who passed on May 6, 2017. We know she is overjoyed to be with... View Obituary & Service Information

The family of John Melvin Moulton created this Life Tributes page to make it easy to share your memories.

John Melvin Moulton graduated with honors from this phase of...

Send flowers to the Moulton family.