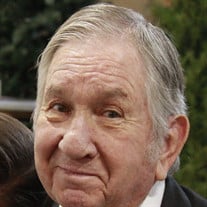 John Francis Cowley of Heber City, Utah, passed away at the age of 84 on Sunday, August 23, 2020 in his home surrounded by his family. His death was a result of an extended battle with Parkinson’s Disease and heart disease. John Francis Cowley was born on February 4, 1936 in Venice Utah, the fourth and last child of Francis and Venola Ohlwiler Cowley. His family moved to Heber City in 1937. He attended Central Elementary and Wasatch High schools in Heber City. At Wasatch High School, he played the tuba in band and the violin for dances. He was class president of his junior class, was involved in FFA, and was the Junior Prom Committee Chair. He graduated from seminary in 1953 and high school in 1954. John completed Army basic training in March of 1955 and was later called up to serve in the Korean War. He was honorably discharged from the Army on November 26th, 1956. John served a mission to the Western Canadian Mission from 1957 to 1959. While in Canada, one of his favorite assignments was working in the mission home, doing communications for the mission president. John married Marilyn Robertson in 1960. They had two sons, John and Mark. They lived in California for several years, where John taught school in Mar Vista. When his father died in 1965, the family moved to Heber, Utah so he could take over the family farm. John continued to teach school in Heber, worked at Park City Ski Resort, and also worked for many years at the Park City Golf Course. He and Marilyn divorced in 1971. John married Wilma Dixon in 1975. Their daughter, Susan, was born in 1983. They were sealed in the Salt Lake Temple on December 29, 1992. John taught 5th and 6th grade for 30 years where he enjoyed the association with the many students who passed through his classroom until he retired in 1995. After retirement, he did volunteer work in the school. He served with Wilma and Susan in the Heber City Utah Stake as a welfare worker, canning dried commodities for ward and stake members. He also served as a ward clerk, served on the high council, and served together with Wilma and Susan as a Primary Sunbeam teacher for many years. John loved farming and his favorite part of it was using his John Deere tractors. He used his John Deere for farming, but also for serving others. In the winter he cleared snow with his tractor for his neighbors, and he pulled a sled behind his tractor to give rides to family, friends, and the members of his Sunbeam classes. John also invited his family to work on the farm with him, including his children, grandchildren, and nephews, where many life lessons and skills were learned in relation to hard work. John knew how to work hard, but he also played hard. He loved to ride horses, ski, and golf and passed this love on to his children. John was predeceased by his parents, Francis and Venola Cowley, and his sister, Helen Williams. John is survived by his wife, Wilma Dixon Cowley; his three children, John R. Cowley (Kathy), Mark Cowley (Tracy), and Susan Cowley; a sister, Ruth Montgomery (Melvin), and a brother, Kendall Cowley; ten grandchildren, Jennifer Cowley Clive, Lindsay Cowley Lee, Megan Cowley, Tyler Cowley, Mariah Cowley Christensen, Andrea Cowley Egbert, Benjamin Cowley, Stephen Cowley, Joshua Cowley, and Taylor Cowley; and seven great-grandchildren. He will be remembered for his willingness to work. We will miss him as a family. We want to thank all who helped him through the last months of his life. John’s funeral will be held on Friday, August 28 at 11:00 AM at the Heber Stake Center at 150 North 200 West. Due to Covid-19, we are asking that only family attend the funeral. The funeral can be viewed at home using the “Zoom” link provided by the Church or Jesus Christ of Later Day Saints, local ward. Instructions as follows. go to HTTPS://US02WEB.ZOOM.US/J/88194449198?PWD=CK03MNFTBGJFNFLYQVBMC1U4TEM1DZ09 Meeting ID:881 94449198 Passcode:003365

John Francis Cowley of Heber City, Utah, passed away at the age of 84 on Sunday, August 23, 2020 in his home surrounded by his family. His death was a result of an extended battle with Parkinson&#8217;s Disease and heart disease. John Francis... View Obituary & Service Information

The family of John Francis Cowley created this Life Tributes page to make it easy to share your memories.

John Francis Cowley of Heber City, Utah, passed away at the age...

Send flowers to the Cowley family.