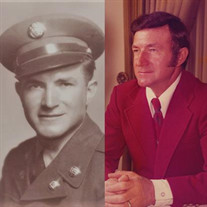 Our beloved and cherished father, grandfather, and great grandfather John Donald Chasel, age 91, passed away peacefully Tuesday morning February 4, 2020. John was born on a ranch in Neola, Utah to Jerry Chasel and Mary Yack Chasel who immigrated from the “old county, old Yugoslavia – Slovenia today and was proud of his Eastern European heritage. But being a citizen of the United States of America was what he considered the greatest blessing of his life. John was loved by many and will always be remembered for his kind, gentle nature and goodness of heart. He was a generous man who quietly helped many in their time of need. Growing up on the ranch John learned to work very hard at a young age, which he continued throughout his life. He rose from humble beginnings and through years of hard work was able to build a successful life for him and his family. After honorably serving in the army during the Korean War he went on to become a successful entrepreneur and businessman. He had a cattle ranch, owned and operated a Sinclair franchise and other service stations, and convenience stores. He owned the Roosevelt theaters and started Quinex Energy Corporation with four others. He also owned a water disposal business and an elk farm. John was also very active in his community. He served as President of the Kiwanis Club, President of the UBIC, and President of the Roosevelt Chamber of Commerce. John had a great love for the outdoors and was an avid hunter and fisherman spending many memorable outings with his family and friends. He also enjoyed snow skiing and hit the slopes frequently until he was 88 years old. Another activity John enjoyed was dancing. He loved the fox trot, square dancing and could dance a mean western swing. Above all, John loved his family. He was a loving and supportive father, grandfather and great grandfather. No words can express how deeply he will be missed. John married Renee' Stewart and together they raised six children, to whom he taught much through his example of hard work, strength, goodness and patience. Later he married Jodie Merlene Johnson. John is survived by his wife Jodie Merlene Chasel, Park City; his children, Kathy (Wayne) Boydstun, Layton; Jerry Chasel (Mark Sikes) Santa Fe, NM; MaryAnne Chasel, Orem; Doug (Melissa) Chasel, Layton; and Cindy Chasel, Provo; 12 grandchildren, 16 great-grandchildren with three on the way; and other step children, step grandchildren and great-grandchildren. He was preceded in death by his oldest son John Stewart Chasel, sisters Rose Rogers and Alice iorge, brother Frank Chasel, father Jerry Chasel and mother Mary Yack Chasel. Funeral services will be held at The Homestead Resort (700 Homestead Dr., Midway Utah) Monday, February 17th, 2020 at noon. A viewing will be held prior to the services from 10:00 AM – 11:30 AM. Interment will be at the Park City Cemetery. Friends and family may visit our online guestbook and share a memory of John at www.probstfamilyfunerals.com.

Our beloved and cherished father, grandfather, and great grandfather...