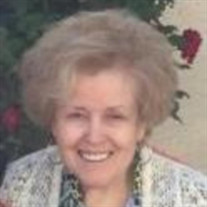 Joann Besendorfer Burnson, 85, passed away peacefully at home in Daniel, Utah the morning of July 2nd, 2021. Joann was born February 11, 1936 in Charleston, Utah to Noah & Nancy Ann (Casper) Besendorfer. She grew up in Charleston on the family dairy farm. She attended the old Charleston school and graduated from Wasatch High School in 1954. After graduating high school Joann attended Brigham Young University where she earned a bachelor’s and master’s degrees in education. While attending BYU she met the love of her life and eternal companion, Peter Leonard Burnson. They were married August 18th, 1961 in the Salt Lake Temple and celebrated 31 years together before Peter passed away in 1992 from Pancreatic Cancer. After Joann and Peter married she moved to Las Vegas, Nevada and taught in the Clark County School District for 34 years. In Las Vegas they raised three children; Heidi Nan, Peter Noah and Wendi Ann. Heidi passed away in 2004 from a brain hemorrhage. Joann was a faithful member of the Church of Jesus Christ of Latter-Day Saints. She served in many callings at church. In high school she was active in sports and was on the debate team. She played on the basketball team and was the pitcher on the softball team. Joann was a talented artist and had a love for china painting. After living 52 years in Las Vegas, Nevada, Joann moved back to beautiful Heber Valley in 2015. She loved reconnecting with her friends at the Wasatch County Senior Center and reminiscing about the good old times during lunches there. Joann’s ideal times were the times she spent with her family. Family was her top priority. She would stand by her family no matter what and loved them fiercely. Sunday and holiday dinners and gatherings with family were her favorite times. Joann is survived by her daughter Wendi Burnson Stewart, Son Peter Noah Burnson, Son-in-law Jason Stewart, Daughter-in-law Janis Burnson; three grandchildren Ashley, Halie and Gunner plus one more grandchild on the way due in September; brother Moroni Besendorfer and brother John Besendorfer. She was preceded in death by her Husband Peter L. Burnson, Daughter Heidi Nan Burnson, Sisters Helen LaVern Cardell, Erma Jean Phillips, Waldie Clegg and many loving brothers-and sisters-in-law. A viewing will be held Friday July 9, 2021 from 6:00-8:00pm at the Heber Valley Funeral Home, 288 N Main St, Heber City UT. A viewing will be held Saturday July 10, 2021 from 9:30-10:30am and services at 11:00am at the LDS chapel on 715 East 600 South, Heber City UT. The burial will immediately follow at the Charleston Town Cemetery. zoom link: http://zoom.us/j/4356545458

Joann Besendorfer Burnson, 85, passed away peacefully at home in Daniel, Utah the morning of July 2nd, 2021. Joann was born February 11, 1936 in Charleston, Utah to Noah & Nancy Ann (Casper) Besendorfer. She grew up in Charleston on the family... View Obituary & Service Information

The family of Joann B Burnson created this Life Tributes page to make it easy to share your memories.

Send flowers to the Burnson family.