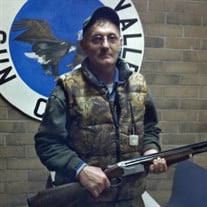 Jeffery Dee Lloyd, born March 5th, 1957, son of Ray and Sharlene (Schear) Lloyd. Passed away December 30th, 2021. Jeff was raised in Midway Utah, he had very fond memories of his childhood and his childhood home. He enjoyed hunting, fishing, and a love of camping. If ever you found yourself at Jeff's camp you became instant family and invited to have many a meal cooked over the fire. He loved his camp and all the friends, memories, and lifelong bonds that were made. Jeff married Annette Collins in 1979 and together they had three children Tiffany, Ashley, and Jesse. They later divorced. He worked for Park City Municipal for 34 years and retired earlier this year. He also enjoyed trap shooting and was President of Heber Valley Gun Club for several years. He won many awards and loved all the friends he made while there. He is survived by his three children Tiffany (Colby) Smith (Midway), Ashley (Colby) Anderson (Heber City), and Jesse Lloyd (Moab). 7 grandchildren Naleea, Kyler, Kacia, Jaynee, McCoy Kinzee and MaKaya. Brother Steve Lloyd (Moab) and Sister Suzanne Russell (Weston, Idaho). Preceded in death by his father Ray Lloyd and Mother Sharlene Schear Lloyd, brothers Johnny and Douglas. A Memorial Service will take place on Friday, January 7, 2021, at 11:00 AM (friends and family may gather at 10:00 AM) at Heber Valley Funeral Home, 288 North Main Street, Heber City, Utah 84032. To stream the services, please visit: https://my.gather.app/remember/jeffery-lloyd

The family of Jeffery Dee Lloyd created this Life Tributes page to make it easy to share your memories.

Send flowers to the Lloyd family.