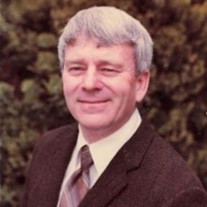 Heber City, UT Jay Arthur Josselyn, age 86, passed away at home surrounded by his family on March 23, 2021. Jay was born on November 8, 1934, in Waipahu, Hawaii, to Harlan Page and Irene Elizabeth (nee McCartney) Josselyn. He graduated from San Diego State College in 1952. He married Dorothy Ann Kilts on July 11, 1959 in San Diego, California. Jay served as a Lieutenant in the Navy, and was stationed at NAS Sangley Point in the Philippines, NAS Whidbey Island in Washington, NAS Barbers Point in Hawaii, NAS Pensacola in Florida, NAS Newport in Rhode Island, and NAS North Island in San Diego. Jay, Dottie and family also lived in Virginia, Maryland, and Utah. Throughout his life, Jay was a Navy pilot of P5M sea planes, and worked as a computer engineer defense contractor, where he was instrumental in developing the JTIDS program for the US armed forces. Jay also served in The Church of Jesus Christ of Latter-day Saints in multiple church positions, in Bishoprics, as Branch President, as a BSA Scoutmaster, and was devoted to missionary work. He also enjoyed scuba diving, fishing, and boating. He was a self-proclaimed guru, a fixer of all things, a builder of all things, and an inventor. His famous quote was “if it moves, I can fix it.” He loved to give everyone nicknames, just ask anyone. Jay is survived by his wife, Dorothy Kilts Josselyn in Heber City, Utah; his children, Paige (Steve) Douglas in Heber City, Utah, Jay (Daphine) Josselyn in Seminole, Oklahoma, Daniel (Jennifer) Josselyn in King George, Virginia, Glenn (Barbara) Josselyn in Spotsylvania, Virginia, Tamara Kupu in Heber City, Utah, Heather Josselyn in Heber City, Utah, Amber (Carl) Francis in Escondido, California, and Paul Josselyn in Poway, California; 18 grandchildren, and 2 great-grandchildren. Jay is preceded in death by his parents, Harlan and Irene Josselyn, his brother, Harlan Josselyn, and his sister, Dorothy Mauzy. A memorial service for Jay will be held at a later date in San Diego, California.

The family of Jay Arthur Josselyn created this Life Tributes page to make it easy to share your memories.

Send flowers to the Josselyn family.