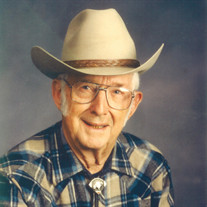 Jay O Haueter age 101 passed away April 29, 2017 at home in Midway, Utah. He was born October 8, 1915 in Midway, Utah to Frederick Otto and Nancy Jane Van Wagoner Haueter. He married Edith Hylton Feb 19, 1943 in the Salt Lake Temple, and together they raised three children. He loved fishing, hunting, and trapping. Many happy hours were spent participating in these activities. He worked many years in the Park City Mines and running his dairy farm in Midway. These two jobs allowed little time for sleep. Jay's pride and joy was a pinto horse, Tony, which he raised from a colt. They were part of the first Wasatch County riding club, and they carried the flag in many parades and rodeos. His wife Edith passed away in 1963. He married Olive J. Gillespie in November 1966. They lived most of the next thirty five years in Edgemont, Provo, Utah They enjoyed traveling, hunting, fishing and dancing. Oh, how Jay loved to dance. He was going to two or three dances per week at age 94. Jay and Olive were Provo Temple workers for ten years, and Jay enjoyed serving as a home teacher. After Olive passed away he returned to his farm in Midway. He loved helping his neighbors whether it was removing snow from their driveways, or taking them a jar of his homemade raspberry jelly. He is survived by his children Barbara (Chad Thacker), Janis (John Oleson), Hylton (Diane) Haueter and his step children Joann Gourdin, Joyce (Larry Mortenson), Valdis Roth, Dan (Dana) Gillespie, Kay (Fred Krause) Roger (deceased) (Janie) Gillespie, and numerous grandchildren, great grandchildren and great great grandchildren. Funeral services will be held Thursday, May 4, 2017 at 11:00 am in the Memorial Hill Ward Chapel 200 S. 250 E. Midway, Utah. There will be a viewing prior to the funeral from 9:30 to 10:30 am. There will also be a viewing Wednesday evening May 3, from 6:00 until 8:00 pm at the Probst Family Funeral Home 79 E. Main in Midway. lnternment in the Heber Cemetery.

The family of Jay O Haueter created this Life Tributes page to make it easy to share your memories.

Send flowers to the Haueter family.