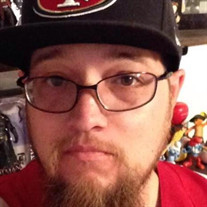 Jason Earl Hales passed away on Friday the 13th of November, 2020, at the young age of 41. Jason was the only child born to his late parents, Earl Douglas Hales and Corrine Amber Tippetts Hales, in Las Vegas, Nevada. Jason spent most of life in Salt Lake City, Utah. He lived with his Dad and step-mother, Patty H. Allred, off and on from the time he was 11 years of age. Jason attended public schools, and he graduated from Taylorsville High School in 1997. Jason proudly served his country in the Air Force and was stationed in Turkey. Jason attended ITT College in Michigan and Utah after his return from his military service. He graduated with his Bachelor’s Degree in Graphic Design. Jason worked for Cox Communications at DealerTrack Technologies located in Draper, Utah pertaining to Automobile Dealer Management Solutions. Jason was a big San Francisco 49’ers fan. He also was a huge Star Wars fan and was a member of a nation-wide gamers group for his play station 4. If Jason were here to speak to us today, he would remind each of us to be patient with each other, say something kind to one another every day, laugh every day, and be kind to animals. Jason was preceded in death by his parents, Earl and Corrine Hales, his paternal grandparents (Douglas and Treva Hales), his paternal step- grandfather, Ernest Smith, his maternal grandparents (Foyne and Berniece Tippetts, Nevada), His cousin, Missy Smith (Lehi), and his paternal Aunt, Rhonda Baum (Alaska). He leaves to cherish his loving memories: his step-mother, Patty H. Allred, his step-dad, Harold C. Allred, his older siblings: Forrest Emerson (Kayleigh) (Arizona), Kayra Darling (California), and Matt L. Blough (Elizabeth) (Utah). Grandmother Colene Smith (Utah), numerous maternal and paternal Aunts and Uncles; numerous cousins; and numerous friends. Viewing is at 11:00 am and the Funeral service is at 12:00 pm, Monday, November 23, 2020 at The Church of Jesus Christ of Latter-Day Saints’ Chapel, 5735 S. Fashion Blvd., Murray, Utah 84107. Jason’s interment: Lehi City Cemetery, 1525 North 600 East, Lehi, Utah 84043.

Jason Earl Hales passed away on Friday the 13th of November, 2020, at the young age of 41. Jason was the only child born to his late parents, Earl Douglas Hales and Corrine Amber Tippetts Hales, in Las Vegas, Nevada. Jason spent most of life... View Obituary & Service Information

The family of Jason Earl Hales created this Life Tributes page to make it easy to share your memories.

Jason Earl Hales passed away on Friday the 13th of November,...

Send flowers to the Hales family.