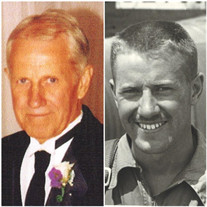 James K Olson, loving son, husband, father and grandfather, passed away peacefully in his home on June 14, 2016 from natural causes due to old age. Jim was born on December 13, 1932 in Lovell, Wyoming to Randall Olson and Bessie Ketchum. Their family later moved to Seattle, Washington. After Jim graduated from high school he served for six years as a fighter pilot in the Air Force. Then he served 2 ½ years in the Swiss-Austrian Mission. After his mission he attended Brigham Young University (Go Cougars!), George Washington University Law School where he received his Juris Doctor and Masters in Tax Law while flying with the Washington, D.C. National Guard and working full time for the IRS. He married Patricia Shafer in the Salt Lake Temple on April 7, 1966. Jim and Pat were married for over 50 years. They raised seven children: Julie (David McNaughtan, Go Utes!), Lisa (Tim Graham), Randy Olson (Kristi), Ryan Olson (Amy), Peter Olson, Jamie Olson (Amie), and Seth Olson (Debbie). Jim was a fighter pilot in the Viet Nam War, earning the Silver Star. After 22 years of military service he retired as a Lt. Col., but he never lost his love for flying. He worked as a tax attorney for The Church of Jesus Christ of Latter-day Saints for 35 years retiring at the age of 76. Jim was a faithful member of The Church of Jesus Christ of Latter-day Saints. He served in many callings, but especially loved working in the scouting program. He was a supportive father and was very proud of his children and their accomplishments. He is survived by his wife, children and 22 grandchildren. He was a very humble, hard working, modest man of great integrity. Because he was a very private man Jim did not want to have a funeral. To honor his request there will be a viewing and service for his immediate family only. His internment will be at the Midway Cemetery in Midway, Utah. The family would like to thank Applegate Homecare and Hospice for their service and the Probst Family Funeral Home for their very sensitive care. In lieu of flowers please donate to the LDS Humanities Fund.

James K Olson, loving son, husband, father and grandfather, passed away peacefully in his home on June 14, 2016 from natural causes due to old age. Jim was born on December 13, 1932 in Lovell, Wyoming to Randall Olson and Bessie Ketchum. Their... View Obituary & Service Information

The family of James K Olson created this Life Tributes page to make it easy to share your memories.

Send flowers to the Olson family.