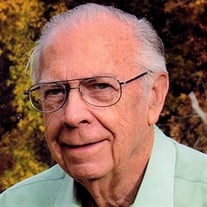 Jack Gordon Osborne loving husband, father, and grandfather died peacefully at his home at the age of 91 on September 23, 2020. Jack was born to William Earl Osborne and Alice Bytheway on May 28, 1929 in Salt Lake City. While this was a joyful time, there was also sadness at the passing of his 3-year older brother Warren two days earlier on May 26, 1929. Jack was an only child until the birth of his sister Joyce in 1937. After graduating from South High Jack attended the University of Utah where he graduated with a bachelor’s degree in Electrical Engineering. While attending the University of Utah Jack enlisted in the Utah Air National Guard. During the Korean War, his unit the 191st Fighter Squadron was called to active duty assigned to the 140th Fighter Wing and stationed at Clovis Air Force Base in New Mexico. Following his discharge, Jack obtained a master’s degree in Industrial Engineering from the University of Utah and began work as an engineer in the private business sector. After nearly a decade with Sperry Corporation, Jack took a position working as a Systems Analyst in the Genealogy Department of The Church of Jesus Christ of Latter-day Saints where he worked for 35 years. After a courtship of 12 years, on September 22, 1969, at the age of 40 Jack married his sweetheart Marilyn Probst, age 38, who was at that time working as secretary to the Presiding Bishopric at The Church of Jesus Christ of Latter-day Saints. They became parents to a son and daughter and moved to the East Mill Creek area of Salt Lake County where they raised their family. Jack was a loving husband and father and despite being a little older at the time he started his family, he was fully engaged in supporting his children in their activities such as dance, piano lessons, little league soccer and baseball, scouts, homework and high school sports. Jack was also a great counselor and caregiver to his wife and children. Jack was a man of tremendous faith which served him well as he supported Marilyn through her 35-year battle with breast cancer which came to an end in 2008. Jack was a man who loved life and enjoyed spending time with his grandchildren, watching baseball, trips to Yellowstone, making bread and cookies to share with neighbors, working on cars, eating ice cream, watching Tom & Jerry cartoons, and sitting at his workbench fixing items around the house. Jack is survived by his children David (Paula), Julie, grandsons William (Ellie), Nathan, and Thomas. Jack is preceded in death by his parents, his brother Warren, his sister Joyce, and his wife Marilyn. A viewing will be held on September 30, 2020 from 9:30-10:30 a.m. at Probst Family Funeral Home 79 East Main Street, Midway UT. Military honors and burial will follow at 11:00 am at the Midway City Cemetery. Friends and family may visit the online guestbook and share a memory of Jack at www.probstfamilyfunerals.com.

Jack Gordon Osborne loving husband, father, and grandfather died peacefully at his home at the age of 91 on September 23, 2020. Jack was born to William Earl Osborne and Alice Bytheway on May 28, 1929 in Salt Lake City. While this was a joyful... View Obituary & Service Information

The family of Jack Gordon Osborne created this Life Tributes page to make it easy to share your memories.

Send flowers to the Osborne family.