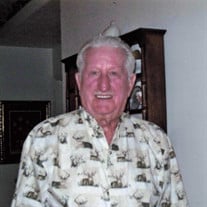 Jack Allen Evans, age 90, passed peacefully from this life to reunite with his Heavenly Father and all of his family and friends who have gone on before. Born in Park City, Utah on May 10, 1930 to John Henry Evans and Delores Mair Evans. The family moved to Salt Lake City, Utah where he lived and went to school. He graduated from West High School then enlisted into the Navy, serving his country for four years. Jack was a proud and deeply devoted patriot. He respectfully flew the American Flag every day. Jack was a member of the LDS Church. He served as a Boy Scout Leader of Troop #574 in the Taylorsville 3rd Ward. He loved taking the scouts to rough camp. He also was a Life Member of the VFW and was Quartermaster of Post 7442 in West Valley City. Jack enjoyed all sports; fishing, hunting, bowling and golf were just some that delighted his time and effort. He was a passionate fan of team sports. He thoroughly enjoyed being a big fan of the “Jazz”, the “Cardinals, the “Rams’ and was a huge “Ute” fan. Jack was a staunch Democrat, a Chevrolet and Union man. He was employed at General Electric as a Welder, a trade he learned in the Navy. He retired from GE in 1988. With Jack’s Father-in-law and best friend, he helped build their family cabin. Throughout the years the cabin has been a delightful gathering place for friends and family with cherished memories and laughter. He loved being there and in that beautiful canyon where the cabin resided. Jack was married to Mickey G. Jensen on November 5th, 1954. Celebrating 65 years of marriage together, they have 4 children. He is survived by his wife Mickey of St. George, daughters Karla Soria of Rigby, ID, Jackie (Lance) Webb of Tabiona, Ut, Layne Evans of South Jordan, UT, Larry (Claudia) Evans of Hawaii, 10 grandchildren, 30 great grandchildren and 6 great great grandchildren, his sister Ella Kay Evans and his Uncle Doug (Josie) Mair. He was preceded in death by his parents, sisters Wilma Mae Evans and Ada Jean Jensen. A visitation will be held at the Heber Valley Funeral Home, 288 North Main in Heber on Friday, May 29, 2020 from 11:30-12:30. A graveside service will follow at 1:00 pm in the Heber City Cemetery (680 North 550 East, Heber). Friends and family may visit the online guestbook and share a memory of Jack at www.probstfamilyfunerals.com.

Jack Allen Evans, age 90, passed peacefully from this life to reunite with his Heavenly Father and all of his family and friends who have gone on before. Born in Park City, Utah on May 10, 1930 to John Henry Evans and Delores Mair Evans. The... View Obituary & Service Information

The family of Jack Allen Evans created this Life Tributes page to make it easy to share your memories.

Jack Allen Evans, age 90, passed peacefully from this life to...