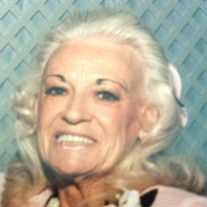 Iris Nadiene Steck Dewsnap, 86, passed away suddenly on March 25, 2015 at St. Marks Hospital in Salt Lake City, UT with her family close by. She was born on October 28, 1928 in Atlantic City, New Jersey. Iris was the only child of James John and Lillian Mae (Seyler) Drass. She graduated from Holy Spirit High School. While still a Senior, she was roller skating at a place in Atlantic City. She was a very good skater. A cute boy, who was a novice at skating, accidentally locked his skated with hers and they crashed to the ground. That boy was the love of her life, Paul Vincent Steck, Jr. And the rest, they say, is history. One of her greatest joys was raising her 10 children. She loved being a mother and was very involved in all her children did. She spent many hours volunteering and was one of the originators of the Egg Harbor City Crusaders football program. In 1976, Iris and Paul joined the LDS church and moved to Utah. After losing her husband, she married Bill Cook, and many years later, married Robert Dewsnap. Iris is survived by a son, Paul Vincent Steck III, daughter, Deborah Mae Stoehr (Leo), son, James Austin Steck (Kim), son, Bruce Kalvin Steck, son, Vincent Ross Steck (Julie), daughter, Kimberly Mae Davidson (Wes), son, John Christopher Steck (Alma), son, Kurt Steck, son, Thor Steck (Jacie), and daughter-in-law, Kandi Steck. She is also survived by 31 grandchildren and 32 great grandchildren. She was preceded in death by her 1st husband, Paul V. Steck, Jr., son Bryan Keith Steck, , her mother and father, John and Lillian Drass, her granddaughter, Jennifer Ann Steck, 2nd husband, Bill Cook, 3rd husband, Robert Dewsnap, and daughter-in-law, Dawnyel Daley Steck. A private family visitation will be held Monday, March 30th at 10:00 AM at Probst Funeral Home, 79 E. Main St., Midway, Utah. A graveside service will be held at 11:00 AM at the Heber City Cemetery. Interment will follow.

Iris Nadiene Steck Dewsnap, 86, passed away suddenly on March 25, 2015 at St. Marks Hospital in Salt Lake City, UT with her family close by. She was born on October 28, 1928 in Atlantic City, New Jersey. Iris was the only child of James John... View Obituary & Service Information

The family of Iris Nadiene Steck Dewsnap created this Life Tributes page to make it easy to share your memories.