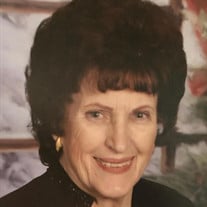 On Friday, July 24th 2020, Ida G. Bigelow, loving and devoted mother of five children, one son and four daughters, passed away from natural cause at the age of 87. Ida was born on December 8, 1932 in Heber City, Utah to Georgia Rose and Orval Gardner of Wallsburg, Utah. Ida grew up in Wallsburg and attended Wasatch High. Soon after she married Lyle Davis on August 5, 1950. Together they had four children. Later they divorced and she remarried and had her youngest daughter. After several years in Utah she then moved to Idaho where she raised her children and began her career in education. She started as a volunteer bus driver for the Payette Head Start Program and moved her way to the top where she became the Center Manager and family advocate for families with young children. After 34 years of hard work and dedication she then retired and moved to Mesquite, Nevada where she lived out the remainder of her life. Ida liked to travel, go camping but most of all she loved to fish and was very good at it. She was an extraordinary woman, mother, daughter, aunt, cousin and Grandmother. Ida was an independent woman who took great pride in her appearance, home and her love for family. She was a great listener and had many friendships that remain to this day. Ida is preceded in death by her son Keith Lyle Davis, her mother, Georgia Rose Gardner and father, Orval Gardner, her two brothers Mac and Clayton Gardner, one granddaughter, Shelby D Wallace and twin great granddaughters, Precious and Cianna Velasquez. She is survived by her four daughters, Shirley (Mark) Wallace of Pendleton, Oregon. Verna (Brad) Carnesecca of Mesquite, Nevada. Patty Marie Krom of Pendleton, Oregon. Ellen Louise Edgmand of Pendleton, Oregon. Two sisters Ellen Peterson and Linda Hanks. She has 25 grandchildren, 42 great grandchildren with two on the way and 12 great great grandchildren. She will be forever loved and deeply missed by many. A visitation will be held in Midway, Utah Saturday August 1, 2020 at Probst Funeral Home 830-930am. 79 E Main St. Midway, Utah. Graveside services will follow at 10am at the Wallsburg Cemetery in Wallsburg, Utah. Friends and family may visit the online guestbook and share a memory of Ida at www.probstfamilyfunerals.com.

On Friday, July 24th 2020, Ida G. Bigelow, loving and devoted mother of five children, one son and four daughters, passed away from natural cause at the age of 87. Ida was born on December 8, 1932 in Heber City, Utah to Georgia Rose and Orval... View Obituary & Service Information

The family of Ida G Bigelow created this Life Tributes page to make it easy to share your memories.

Send flowers to the Bigelow family.