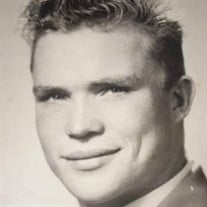 Glen Lunceford Lewis (90) left his earthly home October 26, 2021 after a tough fight with esophageal cancer. Glen was born Pi Day (3.14) 1931 to Elvin William and Angeline Lunceford Lewis. He was the third of ten children raised on the family sheep and cattle ranch in Tabiona Utah. Glen graduated co-valedictorian from Tabiona High School in 1949 where he enjoyed playing basketball and other sports. He was an active lifelong member of the Church of Jesus Christ of Latter-Day Saints and served his mission in the Southern States Mission. He held many other positions in the church throughout his life. He served in the United States Army and was stationed in Orleans, France. Before his mission Glen attended Utah State Agriculture college and then graduated with his Bachelor's degree in Industrial Arts from Brigham Young University after he returned from the army. While attending BYU, he married Carolyn NaDean Roberts on June 18, 1957 in the Salt Lake Temple. He began teaching at Duchesne High School in the fall of 1958, and taught there for 29 years. During his teaching career he started a chess club which won many competitions. He also attended Utah State University for 3 summers where he graduated with his Master’s degree shortly after his twins were born (child 7 & 8) in 1973. During this time, he traveled to Tabiona sometimes nightly to work on the family ranch, feeding cows, shearing sheep, and changing water. He and his brother Bill sheared sheep for many other ranchers around the Basin. He retired from teaching in 1987, although retirement didn’t last long as he soon took a job at Uintah Machine so that he could send 4 more sons on church missions. He had a strong testimony of the gospel and felt sharing the gospel was very important. His work on the family ranch continued until his dad and brother passed, he then ran the ranch until he was 85, when it was sold. He was a true example of a hard worker. Dad also liked to have fun, he was adventurous and loved the outdoors. He enjoyed fishing, hunting and rock climbing. He kayaked, water skied, snow skied, rode bicycles and motorcycles. He shared this love of the outdoors with his family as often as he could. He played chess and checkers and loved teaching his children and grandchildren how to play. He was a school teacher, a rancher, a wood-turner, a pilot, a businessman, a builder, a machinist, but most importantly a husband, father and grandfather. During mom and dad's sixty-four and a half years together, their love and family grew from 2 to 110 which includes 10 children plus spouses, 42 grandchildren plus spouses, 34 great-grandchildren including 2 on the way, and 1 great-great-grandchild. What a legacy of family they created together. He was preceded in death by his son: Stuart William Lewis, grandchildren: Tyler Joe Curry and KaraLee Lewis, great-grandchildren: Kamree Lynn and KyLynn Macee Fitzgerald, his parents: Elvin William and Angeline Lunceford Lewis, and many other family members including his wife’s parents, his brother, 7 sisters, a sister-in-law, and 8 brothers-in-law. He is survived by his devoted loving wife: C NaDean Lewis, his children: James (Michelle) Lewis, Duchesne UT; Eric Lewis, Keizer OR; Terry Lewis, Tabiona UT; Sonya (Mike) Soule, Bear River WY; Annette (Scott) Hepner, Providence UT; (Trudy) Lewis, Saratoga Springs UT; Valdon (Wendy) Lewis, Fruita CO; Vernon Lewis, Nibley UT, Audrey (Justin) Hoffman, Nibley UT, Megan Lewis, Summerville PA; many grandchildren, great-grandchildren, and 1 great-great-grandchild, his sister: Angeline Evans, brothers and sisters-in-law: Basil Defa, Paul Price, Cecil and Sheila Roberts, John and Bonnie Roberts and LaMay Humphreys. Funeral Services will be held at the Tabiona Ward on Monday, November 1, 2021 at 11:00 a.m. with a viewing before from 9:00 to 10:30 a.m. A viewing will also be held at the Probst Family Funeral Home on Sunday, October 31 from 5:30 to 8:00 p.m. at 288 N Main Street, Heber City, Utah. Interment will be at Tabiona Cemetery. A zoom meeting can be joined at the time of the service with the link below: https://us02web.zoom.us/j/96981090247?pwd=eHllTDFwSWZyOGtuSXRoamNsNUlFdz09

Glen Lunceford Lewis (90) left his earthly home October 26, 2021 after a tough fight with esophageal cancer. Glen was born Pi Day (3.14) 1931 to Elvin William and Angeline Lunceford Lewis. He was the third of ten children raised on the family... View Obituary & Service Information

The family of Glen Lunceford Lewis created this Life Tributes page to make it easy to share your memories.