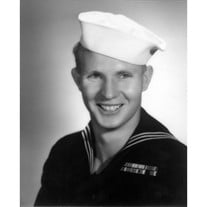 George Junior Richardson 1926 ~ 2017, Heber City, Utah George Junior Richardson, age 90, passed away midafternoon Thursday, September 7, 2017 with his daughter Vickie and Mistie Davis by his side. George was born to loving parents George Henry Richardson and Blanche Mair on December 31, 1926 in Park City, Utah. He married Anita Broadhead on June 1, 1947 in Heber City, they were blessed with two children Keith Allen Richardson and Vickie Anita Richardson Davis. Junior and Anita spent 64 years making wonderful memories together. Some of these memories include camping, getting fire wood, family vacations, enjoying time with grandkids and most importantly spending time together. George served in the US Navy from 1944-1946 and 1950-1951 serving in World War II and the Korean War. George had many jobs including working in the Park City mines, building construction and Wasatch County Public Works. He really enjoyed carpentry work, everyone knew him as the handyman that could fix anything, most of all he really liked serving others, he would leave some of them in tears after helping and taking nothing in return. He liked tools and had a lot, he would lend them out to anyone in need. It made him feel good to help anyway he could. He really enjoyed work and did not look forward to the weekends. George was a great example to many, especially his grandchildren. He will be greatly missed. George was preceded in death by his father and mother, George Henry Richardson and Blanche Mair, Wife, Anita (Broadhead) Richardson, Sister, Joyce (Richardson) Bowman, Brother, Jack Richardson, Great-grandson, Clayton J. Davis, many relatives and friends. Survived by his children Keith (Patsy) Richardson, Arkansas, Vickie (Stan) Davis, Heber City. Grandchildren: Quinn (Amy) Davis, Kevin (Christine) Davis, Curt (Kristi) Davis, Corey (Mistie) Davis, Brittany (Nick) Birch, Dusty (April) Richardson, Justin Richardson and 21 Great-grandchildren. The family extends their grateful appreciation to Gaylen & Elva Wright, Shelly Wright, Lynette & Joey Wright, and the countless meals from Chicks Café, IHC, Dr. Boker and all the nurses that cared for him during his last days. Special thanks to Mistie (Corey) Davis for all the care she has given him. Funeral services will be held, September 14th, 2017 1:00 p.m. at the Heber Valley Funeral Home 288 N. Main, Heber, UT Viewings will be held on Wednesday September 13th from 6-8:00 p.m. and on Thursday September 14th from 11:30 a.m.-12:30 p.m. prior to the services, both at the Heber Valley Home Funeral Home 288 N. Main. Interment at Heber City Cemetery.

The family of George Junior Richardson created this Life Tributes page to make it easy to share your memories.

Send flowers to the Richardson family.