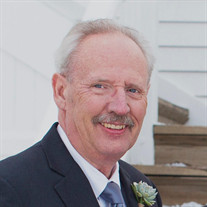 Gar Elliott Jensen passed away on Saturday, July 21, 2018 in Midway, Utah after a long and honest reckoning with cancer. In the days and weeks before, Gar was blessed by the kindness and companionship of his friends and family. He passed in the early hours of Saturday morning with his beloved wife, Jann, by his side. Gar was born on Thursday, September 18, 1947 in Boise, Idaho, to parents Marcus Lefgren and Ann Lona (Elliott) Jensen. He grew up in Boise alongside his older brother, Calvin and older sister, Sharon. After graduating from Boise High School in 1965, Gar enrolled at Brigham Young University. Gar took time off from school to serve a mission for the LDS Church in Scotland before graduating in 1971 with a Political Science degree. He then received his Juris Doctor from the California College of Law in 1976. Gar and Janice Ann Klingonsmith (whom he adored) married on June 5, 1970 in the Los Angeles Temple. He smiled all day long. Gar was a kind and devoted father to his five children, raising them with Jann in Hacienda Heights, California near Jann’s parents and then in the high desert of Apple Valley, California. His children love him deeply. He served his community for thirty-two years as an attorney in the San Bernardino County District Attorney’s Office. Gar was an incorruptible and indomitable prosecutor who was recognized by his colleagues at both the state and federal level for his expertise in narcotics interdiction. He practiced the rigorous and disciplined application of the law. He believed in justice, compassion, and fairness. In addition to his career as a public servant, Gar served humbly and readily in the LDS Church, including as a leader in the Boy Scouts of America and as the Bishop of the Apple Valley 1st Ward. He held a firm testimony of the gospel of Jesus Christ. Gar loved music and played piano and percussion throughout his life. He performed in the Swiss Chorus after retiring to Midway. He was also an unabashedly enthusiastic and faithful supporter of BYU Athletics. Gar leaves a legacy of quiet (and not-so-quiet) integrity. He was bold and sincere in his service to others and love for his fellow man. Gar is survived by his wife Jann; brother Calvin and sister Sharon; children Erika (Robert) Goyer, Camden (Amy) Jensen, Alexis (Jeremy) Bentley, Megan (Brian) Wood and Ian Jensen; grandchildren Quin, Eli, Hunter, Garrin, Cale, Lynnae, Edison, Daisy, Ginger, Oliver and Miles. He is preceded in death by his parents Marcus and Lona, and grandson Carrick. Funeral services will be held at the LDS Chapel located at 250 E 200 S, Midway, Utah on Wednesday, August 1st at 11am.

Gar Elliott Jensen passed away on Saturday, July 21, 2018 in Midway, Utah after a long and honest reckoning with cancer. In the days and weeks before, Gar was blessed by the kindness and companionship of his friends and family. He passed in... View Obituary & Service Information

The family of Gar Elliott Jensen created this Life Tributes page to make it easy to share your memories.

Send flowers to the Jensen family.