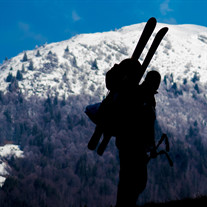 Gabriel Rolando Avila Vermeer (January 12, 1935 to December 28, 2018) On Friday, December 28th, 2018, Rolando Avila Vermeer passed away peacefully as the morning light hit Mount Timpanogos. Rolando lived 83 fulfilling years. He will be lovingly remembered by his 4 children, Elizabeth, Guillermo(Betsy), Patricia, and Rolando. “Grandpa” will be fondly remembered by his 8 grandchildren, Carlos, Seen, Guillermo, Antonio, Maggie, Polett, Nicolas, and Sebastian. He will also be forever remembered by his numerous great grandchildren, nieces, nephews, extended family and dear friends. Rolando was predeceased by his first love, Amalia Paz Arauco and his second love Doreen Archer. Rolando was a adventurous man. He moved to Bolivia as an infant from Holland. Rolando was a Bolivian National Ski Champion. In 1966 he moved to the USA where he pursued a career in the ski industry alongside Rene Farwig. Rolando moved to Park City with his sons in 1976 where he spent the majority of his life. Rolando was born to be a grandpa. He installed magic into every holiday, and cheer into every moment spent with his little ones. He provided everything he could muster for his family until his dying breath. A memorial service was held Saturday, January 5th at 6:00 pm, located at The Abbington in Heber. We gathered with friends and family to commemorate his life and share happy memories. Rolando was blessed to have a large family spread across the globe, he loved deeply. Many hearts will miss him. (Photo Credit: Ivan Dimitroff/Unsplash)

The family of Gabriel Rolando Avila Vermeer created this Life Tributes page to make it easy to share your memories.

Send flowers to the Vermeer family.