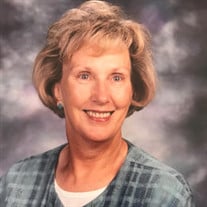 Faye Poulsen Watts was born April 2, 1936, in Liberty, Idaho. She died of natural causes on April 27th, 2022, in Heber City, Utah. Faye was raised on a rural farm in Liberty, Idaho near Bear Lake, immediately succeeding the years of the Great Depression. The farm had no running water or electricity. She was the last of 10 children born on the kitchen table from a mother suffering from typhoid fever. Her beginnings here were humble and reminiscent of earlier periods of western migration. In the context of Faye’s love of literature and history, it is remarkable to consider the historical sense of time and place she lived through from these humble pioneer beginnings through the moon landing of man 33 short years later. She lived in Liberty until she was 13 years old. The family moved to Logan, Utah in 1949. She attended High School and graduated in 1954. She was married to Richard Watts and raised 4 children in a picturesque area called the island on a street named Thrushwood. She made a great life here and most of the best family memories were created in this beautiful area. One of her greatest days was when she graduated from Utah State University with a bachelor’s degree of Science in English on June 9, 1973. -She then began the life of literature that she loved so much. Later in 1983, she would receive her master’s degree in English. She was a media specialist for elementary to college age children and adults. She bestowed the love of books on her entire family and anyone she encountered. She served a mission at the LDS Distribution Center and as an Ordinance worker for the LDS temple in London. She served yet another mission at the Family History Center on the Campus of BYU in Provo, Utah. She was quite adventurous, serving at the Library on BYU Hawaii campus for one year. She also travelled to a good part of Europe including London, Belgium, and Wales and yet another trip to Israel and Egypt. She was a first-class lady and mother who faced down the challenges of being a single woman with 4 children. She encouraged higher thinking and the farm values of hard work and responsibility all coupled with love of music, history, literature, and the LDS Church. She never forgot her childhood, laced with memories, intertwined with the literature of the Western Frontier. She was tough, gentle, and charitable throughout her life. She was the primary force and example for good in the lives of her children. Gathering Memorial to be held May 2nd 11 am. Heber Valley North Stake Center 521 East 500 North Heber City, Utah Consecration of the Grave; May 3, 1 pm Logan, Utah Cemetery SE quadrant Preceded in death by her immediate Family Father and Mother; Edgar and LaRita Poulsen Brothers and Sisters: Blaine, Eileen, Thelma, Dutch, Larry, Delone, Glenda, Muriel. Succeeding Remaining Brother: Kent Poulsen and Mary Kay Son: Chris Watts and Vicki Son: Doug Watts and Deb Daughter: Tracy Coulam and Marc Son: Eric Watts and Jill She had 13 grandchildren and 20 great grandchildren The family extends their hearty gratitude to Spring Gardens Assisted Living Center, IHC hospital emergency room and the floor nurses and doctors. And finally, the RN at Tender Mercies Hospice Care. Please! Instead of sending flowers please contribute to your local library or school in her name. Anyone wishing to watch the service via livestream can do so at this link: https://my.gather.app/remember/faye-poulsen-watts

Faye Poulsen Watts was born April 2, 1936, in Liberty, Idaho. She died of natural causes on April 27th, 2022, in Heber City, Utah. Faye was raised on a rural farm in Liberty, Idaho near Bear Lake, immediately succeeding the years of the Great... View Obituary & Service Information

The family of Faye Poulsen Watts created this Life Tributes page to make it easy to share your memories.

Send flowers to the Watts family.