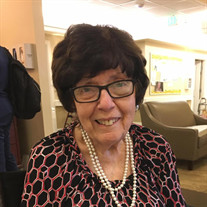 Evelyn M. Spielmann (nee Smith), 93 ½ years young, dearly beloved daughter, sister, mother, grandmother (Gigi) and friend, passed away peacefully on the 14th of March, 2020. Evelyn, was born in New York City on 28 August 1926, to Robert and May Smith (nee Wood). A beautiful pianist, her parents gave her a piano at age 16, which she treasured forever. She also excelled at academics and was accelerated in high school. Late in life, she amazed her neurologist with her mathematical abilities, including counting backwards from 100, by 7’s. Evelyn attended Hunter College in New York City, and worked as a Lab Technician/Phlebotomist for the Bank of New York. When her daughter Pamela turned 12, she handed off the domestic responsibilities to her and returned to work, spending most of the rest of her career as the Attendance Secretary for Locust Valley High School, in Locust Valley, NY. She had a loving but firm relationship with the students, who often tried to convince her of their extenuating reasons why they shouldn’t be considered late or absent! A church altar guild volunteer for many years, she also devoted many hours as a History Docent, giving historic house tours at Westbury Gardens. Evelyn met the love of her life, Frank A Spielmann Jr, at the St James’ Episcopal Church “Young Adults” group and was married in the church in NYC. They began their married life in Manhattan, and a few years later moved to Westbury, Long Island, NY, where they remained. After Frank’s passing in 2001, Evelyn maintained a fiercely independent life, cooking and shopping for herself, helping neighbors and volunteering—dressed up every day in full makeup and her beloved ‘junk jewelry’. She was always there to help guide her family and their offspring, developing intensely close relationships with her granddaughters Lara, Glynnis and Bonnie. In October of 2014. Evelyn sold her home and moved to The Abbington at Heber (now Spring Gardens), where she began a new and wonderful phase of her life, full of activities, new friends and outings in the beautiful Wasatch mountains. The altitude brought a breath of fresh air to her world, with no household management worries. Even her piano made the cross-country journey! Evelyn loved nurturing her garden and watching the squirrels and the birds. Two things she had with her always: a crossword puzzle book and Revlon’s Fire and Ice lipstick. She had an insatiable curiosity and never stopped asking questions, even well into her 90’s. She literally couldn’t resist asking: How tall are you? What’s it like to have beard? Why do men go bald? Why does the snow stay on one slope of the mountain and not on the other? A dedicated and generous mother and grandmother, Evelyn is survived by her daughter Pamela and son-in-law Larry of Toronto, Canada and Park City, UT, grand-daughters Lara (Steven Rutman), Glynnis and Bonnie, son Douglas and daughter-in-law Casey Jo, of Clinton, AR, grand-sons Robbie and Douglas Jr., and grand-daughter Kristen. A celebration of her life will be held at a time yet to be determined. Messages of condolence are welcomed at www.probstfamilyfunerals.com As an expression of sympathy, memorial contributions may be made to the National Council for Adoption, at www.adoptioncouncil.org

The family of Evelyn May Spielmann created this Life Tributes page to make it easy to share your memories.

Send flowers to the Spielmann family.