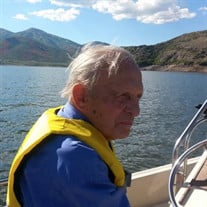 “Family is the anchor in rough waters” Erik Nordstrom, “Alve” as he was called by his family and closest friends, passed away quietly at the age of 97 on 27 October 2021, while still comforting and holding hands with his daughters and surrounded by family. Erik was born and raised on the Åland Islands, Finland. Despite being technically born a citizen of Finland, Erik and his relatives spoke and identified as historically and ethnically Swedish. He was one of seven children and described some of his happiest memories as those rough-housing with his siblings while sharing a bedroom in the farm house built by his father. While still a teenager, Erik left home to work as a seaman. He traveled the world working on a number of ships, ending his career on the high seas as a lead electrician. During the summer of 1949, while home in Åland after being at sea, Erik met and fell in love with Phyllis Johnson at the local community dance hall, Hammarbo. Phyllis had traveled from Boston to Åland to spend the summer of her 18th birthday with her Åland relatives. Their meeting at Hammarbo, and a little match-making by Phyllis’s Aunt Ester, began a loving partnership and marriage of 68 years. Erik ultimately immigrated to the United States to pursue not only Phyllis but also his education, attending Upsala College in New Jersey and later Tufts University in Massachusetts where he earned his Electrical Engineering degree as well as post-graduate study at Northeastern University. Erik had a long and successful career at MIT’s C.S. Draper Laboratory, in Cambridge, MA, contributing to the design of some of the world’s most accurate and reliable guidance, navigation & control systems ~ jobs which required the highest national security clearances. Together, Erik and Phyllis settled in Westwood, MA, and devoted their lives to raising their three daughters, June, Kirsten, and Sonja. Family life included building a beloved summer 1970's chalet on Lake Winnipesaukee, teaching the girls to sail, visits with relatives, attending lots of music events, and family trips to visit relatives on Åland. One of his proudest accomplishments as a father was seeing each of his daughters graduate college and grow successfully into their own lives. In retirement, as empty nesters, Erik and Phyllis were free to jet-set with Kirsten and her Delta buddies who always treated them like royalty. Their travels included almost yearly trips back to Åland to maintain cherished family ties, the chance to keep up with lifetime friends across the country, and to explore and enrich their lives together. Erik also picked up golf (graphing his progress on index cards, always available in his upper left shirt pocket.) After moving to Park City in 2002, life included holding court at Smith’s Starbucks, some golfing, attending music programs, family gatherings for every holiday and event, Park City Seniors luncheons, and some competitive yet also at times comical games of pool. Throughout his life, Erik had a love of flowers and nature, appreciated beautifully engineered automobiles, remained drawn to the sea, and was able to design, figure out, build, and/or fix just about anything. Even into his late 90’s, Erik’s mind remained sharp and the engineer in him was alive and well. He maintained his own cars and everything with the house, was proficient with a Smart Phone (limited only by his vision and busy thumbs) embraced the Uber app when his vision prevented driving, and was controlling his lights and music with Alexa until his final days. Despite all of his interests and skills, his family was always his first priority. Erik was predeceased by his parents Ivar and Naemi as well six of his siblings. He is survived by his loving wife Phyllis; his adoring children June Nordstrom Player (husband Peter), Kirsten Nordstrom (partner Magic), and Sonja Nordstrom; two grandchildren, Erik (wife Kasia) and Stefanie (husband Cody); two great grandchildren of Erik and Kasia, Tyler and Ania; and many nieces, nephews, and their children too in the U.S., Åland, Sweden, and Canada. Most importantly of all, he was dearly loved and will be profoundly missed ~ the Captain of his family’s ship to the very end. A private grave-side service will be held for immediate family on Wednesday 03 November 2021. There will not be a viewing. A celebration of Erik's life will take place at a later date in the Spring. Flowers may be sent to Probst Funeral Homes, 79 East Main Street, Midway, UT 84049, telephone 435.654.5959 (www.probstfamilyfunerals.com) In lieu of flowers, donations to a charity of choice may be made in Erik’s name.

The family of Erik Alve Nordstrom created this Life Tributes page to make it easy to share your memories.

“Family is the anchor in rough waters”

Send flowers to the Nordstrom family.