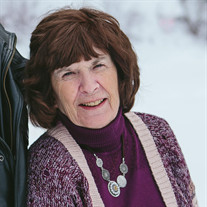 Elva Theola Swain Baum, beloved wife, mother, grandmother, and friend passed away peacefully at her home on September 2, 2016. Elva was born on January 10, 1943 in Heber City to Jay Watson and Theola Remund Swain. Elva spent her childhood living with her family at the church farm at the Hailstone Junction and graduated from Wasatch High School in 1961. Elva attended Stevens Heneger Business College in Salt Lake City. She married her high school sweetheart, Richard Baum, on February 21, 1963 in the Manti Temple. Once married and Richard graduated from college, they moved to Chicago for a short time and decided that the Heber Valley was where they would always call home. They were blessed with three daughters, Teresa Lynne, Christina Mae, and Melissa Ann. Elva had a productive career in business which started in accounting and eventually led to the Wasatch County Commission secretary and Midway City Recorder. She retired in 2002 to become a full time mother and grandmother. She enjoyed the outdoors, mountain picnics, camping, reading, sewing, canning and baking. Every summer she could be found picking and canning fruits and vegetables to share with all her kids. Elva was known as always hosting big family get-togethers with amazing food and fun for the family. Her spare time was devoted to spending time with her family and attending countless sporting events and dance recitals. Not only was she a devoted fan of her family, she loved to watch the Utah Jazz and Utah Ute events. As a member of the Church of Jesus Christ of Latter Day Saints, Elva lived a life full of church service and had many callings from Young Women President to the best cub scout leader around. Elva has left her handprint on many hearts and has blessed the lives of all who knew and loved her. She is survived by her husband of 53 years, Richard Morgan Baum, their three children: Teresa (Jeff) Wootton, Christina (Mark) Earnshaw, and Melissa (Matt) Frentheway and 12 grandchildren. She was preceded in death by her parents, Jay and Theola Swain and her brothers, Phil and Mark Swain. To honor Elva’s wishes the family is having a small gathering followed by burial in the Heber City Cemetery.

The family of Elva Swain Baum created this Life Tributes page to make it easy to share your memories.

Send flowers to the Baum family.