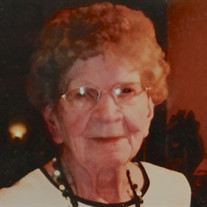 Ellen A. Rider, 99 died June 13, 2015, with family by her side at Elk Meadows in Oakley UT. Ellen was born January 12, 1916, in Baraga MI. She spent majority of her life in the Detroit area of MI and then moved to Oakley UT in 2006. She was the widow of Frederick H. Rider who died on May 22, 1985. Mrs. Rider is survived by two children, Carole (Lee) Rogers of FL/UT and Dale (Jacqueline) Rider of NV, 6 grandchildren: Geoffrey Rogers, Michael (Cheryl) Rogers, Sue Rogers, Brian (Kristina) Rider, Scott Rider, Kimberly (Benjamin) Boyce, and Kelly Rider. She also had 7 great-grandchildren: Katelyn, Jackson, Samantha, Austin, Jonathan, Benjamin, and Adrianna. She had many special nieces, nephews, and a host of extended family and friends. Services for Mrs. Rider will be held on Thursday June 18, 2015 at 10:30 am in the Elk Meadows Chapel, 4200 N. 400 W., Oakley, UT 84055. Share and read memories of Ellen at www.probstfamilyfunerals.com

The family of Ellen A Rider created this Life Tributes page to make it easy to share your memories.

Send flowers to the Rider family.