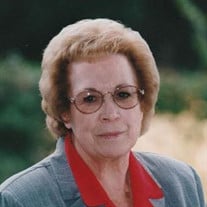 Elizabeth Horrocks Morgan (87) passed away at home on Wednesday, February 20, 2019. Beth was born to Mary Winn Horrocks and Lewis Horrocks and raised in Park City, Utah. She was the youngest of three children. Beth was a graduate of Park City High School (1951); she worked at Coffee Johns Café; she played the Saxophone in the High School band; she played on the girls’ basketball team; and she performed opera in the school choir. Beth met Bernard Morgan on a blind date and they were united in holy matrimony in the Salt Lake Temple on October 23, 1953. Ben and Beth moved to Dugway, Utah where she worked for the Federal Government in the Classified Documents Department. This union was blessed with three daughters: Mary Ann (Doug), Lynn Marie (Joe), and Stephanie (Scott). In 1972, Ben passed with his fight against cancer. In 1974, Beth and the girls moved to West Valley City, to further her career with the Federal Government, OSHA division, in the Department of Labor. After 40 years of service, she retired in 2010. Beth has been a member of the Church of Jesus Christ of Latter-Day Saints her entire life; she has served faithfully in many callings from Primary, Relief Society, and Young Women’s. Beth has been known for her high standards, her kind and giving ways, and she always tried her best to follow the teachings of the Lord. Her favorite past time was shopping; she loved buying clothes for her children and grandchildren. She worked for Lane Bryant for 13 years; and she always said she worked only for the employee discount, which she took full advantage of. Beth was loved by so many including her family, friends, co-workers, ward members and neighbors. Her beautiful life will forever be cherished in the lives of her children; her five Grandchildren: Elizabeth (Matt), Morgan (Jennifer), Ben, Sarah, and Tasha (Wes); and her four Great-Grandchildren: Levi, Ben, Samuel, and Evelyn. Beth was preceded in death by her parents, Lewis Horrocks and Mary LaCroix, and her Stepfather John LaCroix, her husband Ben Morgan, her two older brothers, two brothers-in-law, and father and mother-in-law. The family would like to thank all her Doctors and Nurses who helped care for Beth. A special thanks to Valeo Hospice care for her end-of-life care. “To know her was to love her.” A viewing will be held at Memorial Redwood Mortuary (6500 S Redwood Road, Taylorsville) on Sunday February 24, 2019, from 5:00-7:00 PM. Funeral services will be held Monday, February 25 at 11:00 AM at the Ridgeland Ward (4251 S. 4800 W., West Valley) with a visitation prior to the service from 9:30-10:30 AM. Burial will follow at the Heber City Cemetery. Condolences may be shared online at probstfamilyfunerals.com.

Elizabeth Horrocks Morgan (87) passed away at home on Wednesday, February 20, 2019. Beth was born to Mary Winn Horrocks and Lewis Horrocks and raised in Park City, Utah. She was the youngest of three children. Beth was a graduate of Park City... View Obituary & Service Information

The family of Elizabeth Horrocks Morgan created this Life Tributes page to make it easy to share your memories.

Elizabeth Horrocks Morgan (87) passed away at home on Wednesday,...

Send flowers to the Morgan family.