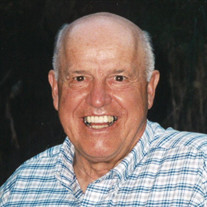 Earl Eugene Wright, 87, died quietly at home Saturday, June 10, 2017. Earl was born on November 5, 1929, in Murray, Utah, the fifth of fifteen children of Cleo and Mary Wright. He graduated from Granite High School in 1947 and married Joan on June 29, 1949, in the Salt Lake City Temple. Soon after their marriage, he left his wife at home and served a two-year L.D.S. mission in New Zealand. His dedication to serving God continued throughout his life as he served as a bishop, a bishop’s counselor, high councilman, young men’s leader, and many other callings. He and Joan served two missions in Nauvoo, Illinois. Earl enjoyed over sixteen years of service as a worker in the Provo, L.D.S. Temple. His love of family and belief in eternal families were manifest in his unfailing passion for family history work. Earl provided for his family by working as a manager at Highland Dairy. He later built a successful manufacturing business, Wright’s Furniture Mill, where many friends, family and associates were employed. He had a vision for possibilities and used this to help others create, build and beautify, living the motto, “Always leave it better than you found it.” His free time was filled with studying history, reading, traveling, golfing and spending time with friends and loved ones. For many years he kept a small herd of sheep to remind him of days as a teenager spent shepherding in the Wasatch mountains—a time and place he loved. Earl leaves his wife of nearly 68 years, Joan Marie Boogaard. Earl was a faithful and loving father of nine children: his son, Sam, his son Terry, his son Tadd and wife Lukie, his son Randy and companion Eliza McGaha, his daughter Colleen Jones and husband Lhomond, his daughter Joanie Spencer and husband Gary, his daughter Angela Weekes and husband Bret, his daughter Heidi Warenski and husband Alan. He was preceded in death by his son, Tim. A viewing will be held from 6-8 p.m. on Wednesday, June 14, at Probst Family Funeral Home, 79 E. Main St., Midway. A viewing from 9:30-10:45 a.m. will precede the funeral services at 11:00 a.m. on Thursday, June 15, at the L.D.S. Stake Center, 165 North Center Street, Midway, Utah. Condolences may be shared online at www.probstfamilyfunerals.com

Earl Eugene Wright, 87, died quietly at home Saturday, June 10, 2017. Earl was born on November 5, 1929, in Murray, Utah, the fifth of fifteen children of Cleo and Mary Wright. He graduated from Granite High School in 1947 and married Joan on... View Obituary & Service Information

The family of Earl Eugene Wright created this Life Tributes page to make it easy to share your memories.

Send flowers to the Wright family.