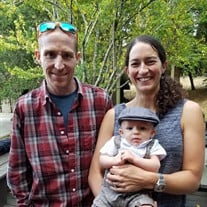 On Thursday evening, August 30th, 2018, our beloved husband, father, son, brother and friend Dustin Craig Linker passed away peacefully at home with his wife by his side. Dustin danced with the devouring and malicious cancer, which ultimately took his life, but not his spirit. His strong will to survive kept him out of bed and walking til his last hours. Dustin was 41 years young. Dustin was born July 6, 1977 in Lander, Wyoming to Karin L. Linker and Scott R. Keller. Karin and Scott were blessed with a daughter, Holly. Holly and Dustin grew up in Riverton, Wyoming, attending and graduating Riverton High School. Holly is blessed with two boys of her own. Dustin grew up loving motocross, the mountains, being outdoors and hanging out with friends. He never met a stranger. He attended one year of Central Wyoming College before pursuing a life in Jackson, Wyoming to snowboard. There, he met his soulmate and best friend, Lynn Neil. They were together for 17 years, one and a half of which they were married. Together, they moved to Utah so Lynn could pursue college. They are very blessed with a son, Kiran Glenn Linker, 15 months old. Dustin and Lynn spent their years chasing their snowboard dreams. Dustin coached and mentored numerous athletes, some making it to the professional level. He traveled all over the world filming, coaching, feeding, housing and being a role model to many kids. He taught us to never give up and to always follow your dream with passion. He is survived by his wife Lynn, son Kiran, mother Karin Keller, sister Holly Vincent, nephews Craig and Logan Vincent, sister-in-law Rachel Hopkins, mother-in-law Jane Nicholson, father-in-law Thomas Neil. Preceded in death by his father Scott Keller, uncle Randy Woodard, grandparents Don and Alma Woodward, Herman and Ruby Linker, Cliff and Rita Evins. Thank you to our family and friends who kept believing in Dustin. Thank you to the IHC Hospice team especially nurse Lisa. Thank you to Dr. Judith Moore and everyone at Diamond Springs Wellness Center who never gave up on him. Thank you to the Chipsa Hospital in Mexico who gave Dustin so much hope. And a very special thanks to all the other cancer dancers he met along the way. He loved you all so much! Service will be held Saturday, September 15 at 1pm, at the Charleston Cemetery. In lieu of flowers, the family asks for monetary donations to help with the funeral costs. Send to 148 N. Center St. Midway, Ut 84049 A Celebration of Life gathering will commence Saturday November 3rd in Midway. Details to be announced.

On Thursday evening, August 30th, 2018, our beloved husband, father, son, brother and friend Dustin Craig Linker passed away peacefully at home with his wife by his side. Dustin danced with the devouring and malicious cancer, which ultimately... View Obituary & Service Information

The family of Dustin Craig Linker created this Life Tributes page to make it easy to share your memories.

Send flowers to the Linker family.