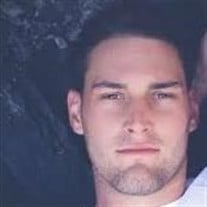 How do you find the words to describe our Paul Bunyan of a son, Drake Richard Sampson. Although he was 6' 3”, when he walked into a room he always made it feel like he was 63 axe handles tall. Drake was born July 8, 1994, and just like Paul, he was a whopper! While raising him, everyone pitched in to supply his needs especially keeping that boy fed. Unlike Paul, nobody had to gather to sing him to sleep at night. He just didn't have time for sleep. He would hit the ground running: phone sales, door to door sales, and modeling shoots were just some of the activities for the day. Then after lunch at Tucanos, and dinner at Buffalo Wild Wings, what could be better than a Batman movie marathon. Rather than put down his axe, he would head off to the gym and pick up the barbells for his 3 a.m. workout. He loved all sports, but especially football and basketball. He graduated from Wasatch High School in 2012 and was proud to have had the opportunity to feel the brotherhood of his teammates, playing on back-to-back state championship basketball teams. Drake was a member of The Church of Jesus Christ of Latter-day Saints and served a mission in Pittsburg, Pennsylvania. Drake was blessed to have several good friends, but the big blue ox that often followed him around was not friendly. He struggled at times with challenging bouts of depression. With his strong will and tireless determination he plowed ahead. He was always up for the challenge of trying to straighten out the crooked streams he crossed, so the obstacles of life could flow on down the river. Unlike the tall tale of Paul Bunyan, it is our greatest assurance that Jesus Christ is real. He is our Savior and Redeemer who, through our faith in Him, will lift us triumphantly over the tests and trials of life through the power of His marvelous atonement. Our family would like to express gratitude to all families, friends and ward members for their love and support. We also thank the Weber County Sheriffs Department, EMT, medical and social services teams at McKay Dee Hospital for the compassion shared and care given. Drake is preceded in death by his grandpa, Richard Taylor. He is survived by his parents, Chris and Charisse Sampson; brothers: Caden and Luke; sister, Shelbie; special grandma, Kenny Taylor; grandparents, John and Barbara Sampson; and several aunts, uncles and cousins that felt like brothers to him. Drake was also blessed to connect with the Panfiloff family, and is survived by his biological father Greg Panfiloff, and siblings: Natasha, Greg Jr., Zach and Cannon. He was also preceded in death by his grandpa (Greg Sr.) and grandma (Mary) Panfiloff. A viewing will be held Thursday, May 11, 2017, from 6 p.m. to 8 p.m. at the Heber City Stake Center, 150 N. 200 West, followed by memories shared in the cultural hall from 8 to 9 p.m. for all family and friends. Funeral services will be held Friday, May 12, 2017, 10 a.m., same location. Internment will be at Lindquist Washington Heights Memorial Park 4500 Washington Blvd, Ogden, UT. Services under the direction of Probst Family Funerals. In lieu of flowers, consider donating to NAMIUT.org Mental Illness and Suicide Prevention or thespeedyfoundation.org.

How do you find the words to describe our Paul Bunyan of a son, Drake Richard Sampson. Although he was 6' 3&#8221;, when he walked into a room he always made it feel like he was 63 axe handles tall. Drake was born July 8, 1994, and just like... View Obituary & Service Information

The family of Drake Richard Sampson created this Life Tributes page to make it easy to share your memories.

How do you find the words to describe our Paul Bunyan of a son,...