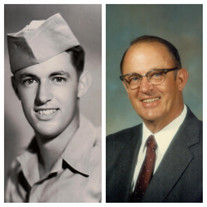 On my honor I will do my best. Douglas L. Merkley, 90, passed away Sunday, November 8, 2015, in Heber City, Utah of causes incident to age. He was born September 9, 1925 in Vernal, Utah to Asher and Birda Lewis Merkley. He graduated from Uintah High School. He served his country during World War II as a U.S. Army combat infantryman in the Philippines. Douglas married Rhea Huber November 20, 1947 in the Salt Lake LDS Temple. He graduated from Utah State University with a bachelor of science degree and later earned a master degree from Brigham Young University. He was employed for 35 years by the Wasatch County School District as a vocational agricultural teacher, counselor, assistant superintendent and superintendent. He was always a champion of education and life-long learning. He enjoyed working with his students and was able to mentor many of them beyond high school. He served as president of the Utah Vocational Teachers Association, and president of the Utah Society of School Superintendents. He was active in the LDS church,—serving in many different leadership positions including bishop. He and his wife Rhea served in the California, Sacramento Mission from 1988-1989. He was a scoutmaster for 15 years and was awarded the Silver Beaver by the BSA. Douglas was devoted to his wife of 68 years and his family. Some of his proudest moments were with his family as they achieved their professional and spiritual goals in life. He loved to go fishing, hunting, and camping with them. He encouraged all those around him to “stop and smell the roses.” He was a kind and courteous man whose positive spirit will be deeply missed by those who knew him. Douglas is survived by his wife Rhea, children Chris (Kathleen), Kevin (Patricia), Robert (Jennifer) and Marie (Frost) Steele, 17 grandchildren, and 18 great-grandchildren, and a brother, Bryce (Merlene) Merkley. He is preceded in death by his parents, a daughter Maureen, and his sisters Virginia Hacking and Kathleen McOmber. The family would like to express their sincere thanks to his hospice nurses and staff. A special thank you to Lisa Nelson for her countless hours of selfless service! A viewing will be held Friday, November 13th, at the 3rd Ward LDS Chapel, 200 East 400 South in Heber City, from 6-8 p.m. Funeral services will be held Saturday, November 14th, at 11 a.m. at the 3rd Ward LDS Chapel, 240 East 400 South, with a viewing prior to the service from 9:30-10:30 a.m. Condolences maybe shared online at probstfamilyfunerals.com

On my honor I will do my best. Douglas L. Merkley, 90, passed away Sunday, November 8, 2015, in Heber City, Utah of causes incident to age. He was born September 9, 1925 in Vernal, Utah to Asher and Birda Lewis Merkley. He graduated from... View Obituary & Service Information

The family of Douglas L Merkley created this Life Tributes page to make it easy to share your memories.

On my honor I will do my best.

Send flowers to the Merkley family.