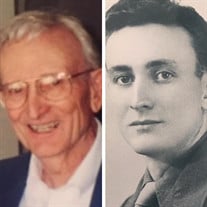 Donald Allen (Bud) Knight died peacefully at the home of his son Jared on Wednesday, March 7, 2019 in Orem, Utah. Born on October 21, 1926 in Magna, Utah to Allen S. (Dick) and Arvilla Bonner Knight. Bud lived in and was educated in Magna, Utah attending Webster Elementary, Cyprus Junior High and Cyprus High School graduating in 1945. After graduation from high school Bud was drafted into the US Army receiving his basic training in Texas preparing for the ground assault of Japan. However, the war ended before his training was complete, so his unit was sent to Europe. He was stationed in Livorno, Italy for the duration of his military service. After his return from Europe he attended the University of Utah and Utah State University. In August of 1951 he married the girl next door, Wilma Poulsen at the Copper Club in Magna, Utah. Their marriage was later solemnized in the Salt Lake Temple in December of 1952. They were the parents of six children Julie Ervin, Allen (Sonja), Barry (Wende), Bryan, Claudia VanQuill (Steve), Jared (LaDonna). Grandfather of 21 and Great Grandfather of 48. In 1972 Bud and Wilma moved their family from Magna to Midway where Bud’s family had been original settlers. They both spent the rest of their days there. Bud was preceded in death by his wife Wilma, parents Dick and Arvilla, sister Betty, and great-grandson, Jimmy Johnson. Bud spent his career in the employment of Kennecott Copper Corp. working at the Arthur Mill, Payroll offices and computer center in downtown Salt Lake City. He worked as an original computer programmer and systems analyst. Bud had a fervent testimony of the Gospel of Jesus Christ and spend countless hours in his service. Callings included Elders Quorum President, Bishop, Stake High Councilor and Stake Clerk. Bud and Wilma served as Senior Missionaries in the Sacramento Mission in the 1990s. Viewing will be at Probst Family Funerals at 79 East Main Street in Midway from 6:00-8:00 p.m. on Monday Evening March 11, 2019. Funeral Services will be Tuesday, March 12, 2019, 12:00 Noon at the Legacy Ward of The Church of Jesus Christ of Latter-Day Saints, 250 East 200 South in Midway, Utah. Viewing for friends and family will begin at 10:30-11:30 a.m. at that address. Condolences may be shared online at www.probstfamilyfunerals.com.

Donald Allen (Bud) Knight died peacefully at the home of his son Jared on Wednesday, March 7, 2019 in Orem, Utah. Born on October 21, 1926 in Magna, Utah to Allen S. (Dick) and Arvilla Bonner Knight. Bud lived in and was educated in Magna,... View Obituary & Service Information

The family of Donald "Bud" Allen Knight created this Life Tributes page to make it easy to share your memories.

Donald Allen (Bud) Knight died peacefully at the home of his...

Send flowers to the Knight family.