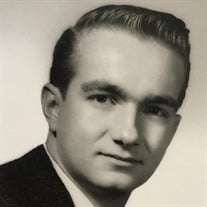 David Prescott Farnum. of Heber City, UT, our beloved father, grandfather, great-grandfather, brother, uncle and friend passed away peacefully September 13, 2018 in Salt Lake City, UT at the age of 82. David was born on December 15, 1935 in Boston, Massachusetts to John Earle and Elizabeth (Prescott) Farnum. David served overseas as a combat air- crewmen in the US Navy. Returning to Massachusetts, he married Jane (Hammond), his wife of 47 years. David loved learning and was passionate about many things in life; electronics became his first career, as well as a lifelong hobby, and led he and his family to California in 1966. He also enjoyed photography and devoted many hours to taking and developing his photographs. It was his love of flying however that led David and his family to Utah in 1979, where he ran the Heber Valley Airport FBO and the Heber Valley Flying Service, spending many years doing what he loved the most, flying small planes, giving glider rides and teaching others to soar. David was preceded in death by his wife Jane and his daughter Sandra (Mel) Uhl. He is survived by his daughter Gayle Roetman (Rob), son Jeff, grandchildren Joshua, Erika, Jacie, Alexander and Michael, as well as several great-grandchildren, nephews, cousins and sister Elizabeth (Berry) Haigis. In keeping with his wishes, David was cremated and his ashes will be scattered in a family ceremony. David struggled with MS later in life and the family suggests a donation to the Multiple Sclerosis Foundation in lieu of flowers. His family would like to extend its gratitude and thanks to the staff at the Abbington Senior Living Community in Heber City and St Joseph's Villa in Salt Lake City. Family and friends may visit the online guestbook and share a memory of David at www.probstfamilyfunerals.com

The family of David Prescott Farnum created this Life Tributes page to make it easy to share your memories.

Send flowers to the Farnum family.