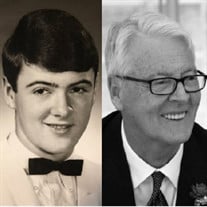 David William Densley, of Heber City, passed away in his sleep on Thursday, November 15, 2018, at the age of 69. Dave had been dealing with a number of health issues including diabetes, leukemia, and most recently, a respiratory infection. Dave is the son of Dan “Bill” Lavoe and Ruby (Osborne) Densley. Born in Murray, Utah, on April 12, 1949, Dave had fond memories of his younger years in Rose Park where he loved to play baseball and any other sport he came across. He moved to Heber City with his family where he attended Wasatch High School. While at Wasatch High, he was an all-star athlete excelling in football, baseball, basketball, tennis, and track. After graduating in 1967, Dave went to Brigham Young University to play football. A knee injury ended his football career in 1969, but Dave found a new sport to be passionate about—golf. Dave was blessed to have worked in the golf industry for many years as a pro shop manager, golf retail salesman, and as a golf professional. Dave loved golf—nothing brought him more happiness except his seven children. He always had a putter, cup, and balls nearby. Golf balls, tees and clubs were a commonplace in his home. After a back injury sidelined him from the game for several years, he was recently able to play again finding so much joy in chasing that white, dimpled ball. Dave was very charismatic. Everyone he met was drawn to him. He always had a corny joke or some sort of pun to share. Often in conversation, he would make some bizarre remark just to see if you were listening. He could always bring a smile to someone’s face and make you laugh, even at the most inappropriate times. He was his grandkids’ biggest fan, supporting them at every event he could. He especially loved attending games. He loved everything about sports and had a memory filled with random facts and memorable moments in many sports and about famous athletes. He was always very positive and had a way of teaching and encouraging others. He instilled confidence in the lives of many young athletes as a coach. He is survived by his children Gentry (Candice), Aubrey (Ben), Niki, Sommer (Beau), Zachary, Tyler, and Lexi (John); his brother Reuben (Karen) Densley and two sisters, Rosemary Sue (Dennis) Olsen and Danya (Brent) Eichers as well as seven grandchildren and several nieces and nephews. David is preceded in death by his parents “Bill” and Ruby. A funeral service will be held Wednesday, November 21, at 12 p.m. in The Church of Jesus Christ of Latter-Day Saints located at 1205 West 650 South in Heber City with a viewing prior to the service from 9:30–11:30 a.m.

David William Densley, of Heber City, passed away in his sleep on Thursday, November 15, 2018, at the age of 69. Dave had been dealing with a number of health issues including diabetes, leukemia, and most recently, a respiratory infection. Dave... View Obituary & Service Information

The family of David William Densley created this Life Tributes page to make it easy to share your memories.

David William Densley, of Heber City, passed away in his sleep...

Send flowers to the Densley family.