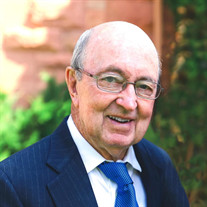 Obituary for D. James Croft David James “Jim” Croft, 78, passed away at his Midway home on Wednesday, December 2nd. Jim was born on February 5th, 1942 to Joseph Carlos and Dorothy Beth Croft. He grew up in Salt Lake City, Utah with his older brother, Rowland “Spider,” and his younger sister, Sue. He attended East High School and earned the honor of valedictorian in the class of 1960. Jim attended the University of Utah for two years and then Stanford University where he graduated with a degree in mathematics in 1964. In eighth grade, at Hillside Junior High School, he ran for the position of Boys Activity Manager. A beautiful girl named Bette Jo Slagle ran for the position of Girls Activity Manager. By asking her to the Election Dance, he began a 64 year courtship. They married on July 2, 1964 in the Salt Lake Temple. Jim regularly said, “I’m on a year-to-year contract, and hope to earn enough points to renew my contract another year.” He worked hard as her travel agent, footman, ski partner, and all around best friend. Every year, for 56 years, she renewed. He was a devoted husband. Jim and Bette Jo raised four outstanding children. As an active father, he taught his children to exceed their potential. He often learned new skills to facilitate activities for the kids. Volunteering as a judge for diving competitions or as the starter for swim meets occupied many Saturdays each summer. He coached baseball, filmed football games, and served as co-PTA president with Bette Jo for the children’s high school. Jim taught hard work, personal responsibility, and creativeness - most often through his example. He was a devoted father. The Croft family included more than just the nuclear family. Jim and Bette Jo welcomed numerous others into their home -- nurturing, caring, giving support and telling jokes. They love and cherish their bonus family and live by the mantra “the more the merrier.” As the clan grew in number, the grandchildren revered “Papa Jim” as the stud of the family. Continuing traditions set with his own kids, he wore them out during the activity packed days and then told them stories as they drifted off to sleep. He was a wonderful grandfather. Jim earned his PhD in Operations Research from Northwestern University in 1970 and began teaching statistics at the University of Utah. He loved challenging his students, explaining the subject matter, and watching the light bulb go on when they began to understand. As a bishop and a youth leader in the Church of Jesus Christ of Latter Day Saints, he spent countless hours teaching lessons and conducting activities, all the while telling stories and wearing goofy ties that had a message. He was a devoted teacher. In 1981, Jim was appointed by the Reagan Administration to be the Director of Examination and Supervision for the Federal Home Loan Bank Board. Instrumental in leading regulators during the 1980’s savings and loan crisis, he later served as an expert witness in cases that involved bankrupt institutions. He started the east coast office of MCS Associates, a consultancy specializing in the savings and loan industry. After MCS, he became the Chief Credit Officer for Freddie Mac, overseeing risk for the mortgage giant. In 1990 he founded the Mortgage Asset Research Institute (MARI) and was recognized as one of the country’s foremost experts in the area of mortgage fraud. His hard work, dedication, and expertise earned him the respect of all who knew him. He was a brilliant businessman. Jim was always active. He ran for years with friends and colleagues at the U of U and in Washington DC. He loved riding his bike, and took many cycling trips with Bette Jo and friends all over the world. Proud of his position at the front of the pack, he led the way up many hills. At the end of each trip, he wrote creative songs highlighting their many adventures. He played tennis and exercised daily. An avid skier and water skier, he cut deep turns whether on the slopes or behind the boat. He was always the scorekeeper when playing dominoes, and usually managed the best score! He will be greatly missed by his family, adopted family, friends, and associates. He was a wonderful husband, father, and teacher. Funeral Services will be held on Saturday, Dec. 5, 2020 at 1:00 pm at the Midway Stake Center, 165 N Center Street, Midway, Utah. A graveside in the Midway City Cemetery will immediately follow. Funeral services will be available to zoom. The meeting ID number is 4356545458 for those wishing to watch the proceedings at home. Covid-19 guidelines including mask and social distancing will be required at the services. Friends and family may visit the online guest book and share a memory of Jim at www.probstfamilyfunerals.com. Jim loved telling stories. In lieu of flowers, consider telling a story to a family member and donating to Hope Projects. (www.hopeprojects.com)

The family of David James 'Jim' croft created this Life Tributes page to make it easy to share your memories.

Send flowers to the croft family.