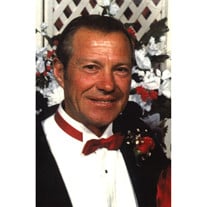 Darrell Wayne North passed from this earth on July 24, 2018 at home at the age of 86. He was born in Heber City, Utah on January 21, 1932 to Glen North and Iene Morris North. Attended school in Heber City, graduated from Wasatch High, served in the Navy during the Korean War. Married Shannon Allison - later divorced. To this union a daughter Kathy was born. Married Barbara Kay Thompson on September 30, 1961 in Heber City, Utah. Later sealed in the Vernal Temple. Barbara passed away in a tragic accident on June 27, 2015. To this union was born a daughter Debra Kay and a son Bradley Wayne. Darrell was an active member of the Church of Jesus Christ of Latter Day Saints and served in the Vernal Temple for many years with his wife Barbara. Darrell had a wonderful singing voice and played guitar, he played in several bands and groups of friends. He was a very quiet and humble man so it was sometimes hard to get him to sing, but we all love to listen to him. In later years Darrell recorded some songs, and family and friends will treasure them always. Darrell worked at numerous jobs through-out his life, In timber and logging, as a miner in the Keetly and Park City mines, truck driver, later owned his own trucking company hauling crude oil for many years. Darrell liked to go prospecting in many placesthroughout his lifetime, he never got rich but enjoyed every minute of it. Darrell is survived by daughters Kathy (Val) Davis, Debra Baker, a son Bradley North, a Brother Glen (Elda Rae) North, sisters Luann Singleton, Erva Roberts, Glendall Speirs and a sister-in-law, Bonnie Brimhall (Leon deceased), brother-in-law, Forrey (Tamra) Thompson, 10 grandchildren and 16 great-grandchildren. Preceded in death by his Parents, sisters Gladys (Thomas) Farr, Evelyn (Clyde) Rollins, Kay (Clarence) Welch, Dora (Max) Mcaffe; brothers-in-laws Leo Speirs, Max Bird, LeRoy Singelton, Terry (Linda) Thompson, Leon Brimhall and grandsons Cody and Caleb Davis. Funeral services will be under the direction of Heber Valley Mortuary. Funeral will be held at 11:00 A.M. on Saturday, August 4, 2018 at the Cobblestone Ward (1661 E. 980 S., Heber City, UT) Viewing will be Friday, August 3rdfrom 6-8 P.M. and August 4thfrom 9:30-10:30 A.M. prior to the funeral. Both viewings will be held at the Cobblestone Ward. Interment in the Heber City Cemetery.

Darrell Wayne North passed from this earth on July 24, 2018 at home at the age of 86. He was born in Heber City, Utah on January 21, 1932 to Glen North and Iene Morris North. Attended school in Heber City, graduated from Wasatch High, served... View Obituary & Service Information

The family of Darrell Wayne North created this Life Tributes page to make it easy to share your memories.

Send flowers to the North family.