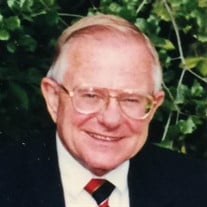 Daniel Wayne Hoffman, age 87, died November 23, 2019 at his home in Park City, Utah after a courageous battle with Lewy Body Dementia. Daniel was born the son of Gilbert Harman Hoffman and Margaret Mary Malloy on April 23, 1932 in Westlake, Ohio. Daniel enjoyed the outdoors living in Park City where he moved in 1986, snow skiing everywhere in the Rockies and Cascades, and camping and 4x4ing in central and southern Utah and Baja Mexico. He was a big sports fan and follower of the Utah Jazz, Purdue Boilermakers, and University of Utah Utes. He had a passion for everything mechanical including his career at Unisys and Freightliner, and attending the annual Reno Air Races and Laguna Seca Speedway races. He graduated from St. Ignatius High School in Cleveland, Ohio and then attended Purdue University where he received his Bachelor’s Degree in Engineering. In 1958 moved to Salt Lake City, Utah where he started his career at Sperry Rand. On February 14, 1974, he married Nadine Bower Gibson. In 1977 he moved with his family to Lake Oswego, Oregon to work at Freightliner Corporation which was based in Portland, Oregon. In 1982, he moved back to Utah to work at Sperry Rand, which later became Unisys which is where he eventually retired from. He was preceded in death by his father and mother, Gilbert Harman Hoffman and Margaret Mary Malloy, his wife of 45 years Nadine B. Hoffman, and his son Gregg N. Hoffman. He is survived by his brother James E. Hoffman of Los Altos, California; son Ross Hoffman (Diane Cercle) of Nampa, Idaho and grandchildren, Nika and Chase Hoffman, of Nampa, Idaho. Funeral services will be held on Saturday, December 7, 2019 at St. Mary of the Assumption in Park City, Utah, 1505 White Pine Canyon Rd, Park City (located at the corner of Highway 224 and White Pine Canyon Road). The funeral Mass will be from 1:30 p.m. – 2:30 p.m. A Celebration of Life reception for Daniel will follow the Mass at St. Mary’s. Interment will then follow at the Park City Cemetery. In lieu of flowers, donations can be made to St. Mary’s Catholic Church in Park City, Utah. Arrangements in care of Probst Family Funerals in Heber City, Utah.

The family of Daniel Wayne Hoffman created this Life Tributes page to make it easy to share your memories.

Send flowers to the Hoffman family.