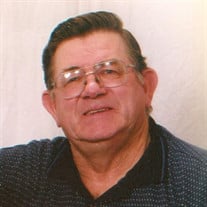 Dale Thomas, our beloved dad, grandpa, great-grandpa, and brother, peacefully returned to his Heavenly Father on Saturday, December 29th, 2018 at his home in Francis, Utah. Dale was born April 16th, 1942 to George Arnold (Barney) Thomas and Augusta Josephine (Gussie) Klein in Francis, Utah. He married the love of his life, Sadie Belva Luke, on March 30th, 1962 in the Salt Lake Temple. He loved his family and especially his grandchildren. He was wrapped around the fingers of every one of the grandchildren and they always kept him active. Dale was a hard worker, where he would be up before dawn and labor well into the evening. He could be found in the yard on his tractor anytime of the day. He loved woodworking, working on the farm, cooking, watching old westerns on the television, and spending quality time with his family. He was a life-long member of the Church of Jesus Christ of Latter-day Saints where he was a true and diligent servant of his fellow man…Dale would drop everything to help someone in need. He is survived by his children, Troy (Charmae), Darin, Russell (Suzette), Shelley (Tony) Atkinson, Luke (Courtney); 16 grandchildren and 8 great grandchildren; his brothers’ George (Sue) and Lee (Linda) Thomas. He is preceded in death by his wife Sadie; his parents, Barney and Gussie; his in-laws Lamont and Belva Luke; daughter-in-law Charmae Thomas; grandson, Tyler James Thomas; his sister Melva Graham; and brother Billy Thomas. Viewings will be held in Francis, Friday, January 4th, from 6 to 8 p.m. and Saturday, 930 to 1030 a.m. Funeral services will be held Saturday, January 5th, 2019, at 11 a.m. at the Church of Jesus Christ of Latter-day Saints, 387 East Last Frontier Lane, Francis, Utah. Internment will follow services at the Francis Cemetery.

The family of Dale Thomas created this Life Tributes page to make it easy to share your memories.