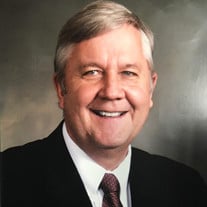 Claude Royal Hicken was miraculously born into this world on October 22, 1953 to Vay Huffaker Allison Hicken and Cyril Mahoney Hicken. Vay, a widow who thought she would never have children, married Cyril, a widower with 6 living children. At 41, she became a loving stepmother. Can you imagine how happy and surprised they were to find out a year later that they would have another child? Claude, an only child with 6 siblings! Claude was raised on the Hicken Dairy Farm in Heber City, Utah. In 1973 he started dating June Moulton, the Wasatch Dairy Princess. He referred to her as his princess for the rest of his life. They were married on May 3, 1974 in the Provo Temple. Claude had been employed by Amoco Oil and the couple planned to move to their Western Division Headquarters in Boulder, Colorado. Then just a month before they married, he decided to stay in Heber and take over the family farm. They raised Brandon C. (Janelle), Alena June (Lincoln Hall), Preston Royal (Casadi), Gavin Creed (Linzi), Addison Moulton (Jenn), Collin Jack (Shanna), Kayden Cyril (Kellie) and Bryan Kinsey, who they claim as family. The farm turned out to be a good place to raise a family and teach children the value of hard work and responsibility. Claude served as Elder's Quorum President, Bishop of the Heber 3rd Ward, and a counselor in the stake presidency. In 1999, they sold the cows and bought Plaza Cycle in Salt Lake. He and his princess started another chapter in their lives and ended up with Escape Motorsports, Plaza Powersports, Fast Track Motorsports, Monterey Peninsula Power Sports, Royal Trailer and Highland Golf. Along the way, Claude served on many water boards, including serving as President of the Central Utah Water Conservancy District for 2 terms. He was always busy with his work and always working on future projects. In 2010, they moved to Coronado California because of his health. They always loved their hometown, but quickly became involved in California. He easily made friends and kept track of everyone he met. He served as President of their Homeowner's Association, Bishop of the Imperial Beach Ward and Harbor Ward. He loved people and they loved him. He made an impression on everyone he met, whether in his callings in The Church of Jesus Christ, employees, neighbors, business associates, doctors or strangers. He was a great leader because he wanted everyone around him to succeed, grow and improve and feel good about a job well done, whether it was in business, church or the community. He was very empathetic, kind and thoughtful, and set a high bar for integrity. He enjoyed having his family, extended family and friends coming to Coronado to visit. He would give them the 75 cent tour and roll out the red carpet. 4 years ago, he started selling his businesses so he could take more trips with his princess and spend more time with his family, 18 grandchildren and his antique cars. But life put a crimp in his plan. Last year he battled colon cancer and was victorious. Then COVID-19 ruined vacations and travel itineraries. A couple of weeks ago, he just wasn’t feeling well. Last Wednesday afternoon, he was diagnosed with leukemia, hospitalized and began treatment. The disease caused extremely thin blood to bleed into his brain and squeezed the life out of a beautiful man. He lived his life with grace and dignity and died the same way. He is survived by his wife, whom he treated like a princess and made her laugh every single day, his 8 children, brothers Jay (Margaret) of Providence, Utah; Joseph (Leslie) of Willmette, Illinois; Dale (Barbara) St. George, Utah; and Robert (Pat) of Gilbert, Arizona. He was preceded in death by his parents, sisters Norma, Elaine Garlick (Jay) and brother Neil (Phyllis). In lieu of flowers, please consider making a donation to the Perpetual Education Fund, Missionary Fund, or Humanitarian Fund of the Church of Jesus Christ of Latter-day Saints. Due to COVID, a private funeral service will be held for family only on Thursday, November 19, 2020 at 11:00 am MST. Services will be live streamed and may be view Interment at: http://mywebcast.churchofjesuschrist.org/Events/hebercityutahstake

Claude Royal Hicken was miraculously born into this world on October 22, 1953 to Vay Huffaker Allison Hicken and Cyril Mahoney Hicken. Vay, a widow who thought she would never have children, married Cyril, a widower with 6 living children. At... View Obituary & Service Information

The family of Claude Royal Hicken created this Life Tributes page to make it easy to share your memories.

Claude Royal Hicken was miraculously born into this world on...

Send flowers to the Hicken family.