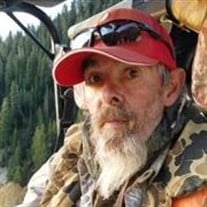 The one, the only Chris D. Lindsay, born and raised in Heber City Utah has passed away in an unexpected ATV accident at the highest point of Snake Creek on the first day of the 2019 deer hunt 10/14/19. This year was supposed to be the best... View Obituary & Service Information

The family of Chris Dee Lindsay created this Life Tributes page to make it easy to share your memories.

The one, the only Chris D. Lindsay, born and raised in Heber...

Send flowers to the Lindsay family.