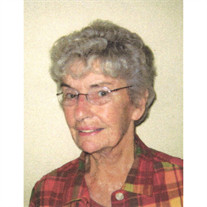 Charlotte Phyllis Jones Crook was born in Bloomingdale, New Jersey, November 24,1925. Her parents were Richard Ernest Jones and Dorothy Phillips. She had a happy, carefree childhood, but during her high school years America became involved in World War ll. The nearby CCC camp became a training facility for the army signal corps. On Sundays some of the soldiers attended services at the Methodist Church and that is where she met her future husband, Clark J Crook, from Heber City, Utah. They became engaged before he shipped overseas.Three years later when the war ended he returned to New Jersey and they were married in theMethodist Church where they first met. They settled in Heber City, Utah, built a home on his family farm, and raised six children there. Phyllis was a convert to The Church of Jesus Christ of Latter-Day Saints. Over the years she served in all the auxiliary organizations: MlA, Primary ward and stake Relief Society, and Sunday School. J and Phyllis served a mission to Illinois Peoria Mission. After 60 years J died and Phyllis was left alone on the farm, but it was more than she could take care of so the children told her to sell it and move to town. That was a sad decision because of all the memories there. The following poem described her feelings: We sold the old farm home today The barns, the fields of greening hay The little brook, the waterfall Bright flowers that grew by the garden wall. We sold the kitchen, white and neat The stairway, worn by dancing feet Of children now gone far away. We sold the old farm home today. We sold the orchard bright with bloom The hearth fire in the living room The big front door that opened wide To welcome there the smiling bride. The tall elm trees that thru the years Have nodded o'er our joys and tears Oh, what of gold or wealth can pay For memories we sold today. Phyllis was preceded in death by her husband, Clark J, her parents, a baby sister Evelyn, and a sister Rita McCabe. She is survived by her children, Patricia Adams, Virginia (Annie) DeGroff, James Ernest Crook, Susan Crook, John Phillip Crook, and Thomas J Crook. Funeral services will be held Thursday, August 3, 2017 at 11:00 a.m. in the Heber 15th Ward Building, (715 E. 600 S., Heber City) Family and friends may attend a viewing on Wednesday evening from 6-8 p.m. at Heber Valley Funeral Home (288 N. Main St., Heber City) and Thursday from 9:30-10:30 a.m. prior to the services at the LDS church. Interment in Heber City Cemetery.

The family of Charlotte "Phyllis" Crook created this Life Tributes page to make it easy to share your memories.

Send flowers to the Crook family.