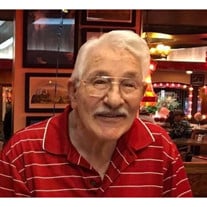 Charles R. Colvin of West Valley, Utah died at Promise Hospital in Salt Lake City on February 19, 2018. Charles was born September 17, 1929 in Idaho Falls, Idaho. His parents, Frank David Colvin and Emma Colvin Lemon, raised him and his younger brother, David at their family home on Woodside Avenue in Park City. Whether you knew him as Dad, Grandpa, Charles, Chick, Uncle Chick or Sergeant Major you knew him as one of the kindest and most thoughtful people to ever come into your life. If you knew him, you will miss him. He graduated from Park City High School in 1947 and enlisted in the United States Army, where he served for 27 years, ultimately earning the highly distinguished rank of Command Sergeant Major. His military career took him around the world and included service in Vietnam during the most turbulent time of that war, the TET offensive. For his service during that conflict he earned the Bronze Star for meritorious achievement in ground operations against hostile forces. He was always proud to let you know he served with the Army 1st Cavalry Division. After retiring from the military in 1974 Charles had a very successful career in residential real estate sales before retiring to his home in West Valley. Charles married Ruth Young, also of Park City, in 1950 and together they had four sons, Robert (Susan) of Coeur d Alene, Idaho; Kurtis (Wendy) of Youngsville, North Carolina; Kevin of Pocatello, Idaho and Kory, also of Pocatello, Idaho. He later married Elva Montanez and together they had one son, Shawn (Stephanie) of Arlington, Virginia. They later divorced and for the last 19 years Charles has shared love and companionship with his special friend, Ellen Fullmer, of Salt Lake City. He is survived by his brother David Colvin (Gladys) of West Valley, and all five of his sons. His family legacy includes 13 grandchildren, 34 great grandchildren and 4 great, great grandchildren. Funeral services will be held Saturday, February 24 at Heber Valley Funeral Home located at 288 Main Street in Heber, Utah. Visitation will begin at 12 noon with a memorial service commencing at 1:30 pm. Graveside military honors and dedication will follow at the family section of the Park City Cemetery.

The family of Charles Ruben Colvin created this Life Tributes page to make it easy to share your memories.

Send flowers to the Colvin family.